Seventeen people were killed and 13 others got injured in a major bus accident in Uttar Pradesh’s Mainpuri District’s Danhara area on the morning of June 13. The bus was carrying mostly labourers who worked in brick kilns and were returning to their native villages.

Initial probe reveals accident took place when the driver of the bus was speeding and the bus lost its control near Kiratpur village in Mainpuri and rammed into the road divider.

Mainpuri District Magistrate Pradeep Kumar has confirmed the death of 17 passengers and said that 13 people were injured. Three of the victims sustained severe injuries and were shifted to the Safai hospital in Etawah District, one of whom died during the treatment.

“The bus, with around 60-70 people onboard, was on its way to Farrrukhabad from Rajasthan’s Jaipur when the accident occurred in Tirathpur village at around 5.30am,” Om Prakash Singh, Mainpuri additional superintendent of police (ASP) said.

ASP also confirmed, “The bus driver has lost his left leg and is currently admitted to a hospital in Saifai”

According to a passenger “Many of the deceased were passengers who were travelling on the roof of the bus.”

Yogi Adityanath, Chief Minister Uttar Pradesh extended condolences to the victims and their families. He has asked the administration to provide appropriate medical treatment to the injured passengers. 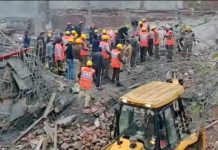