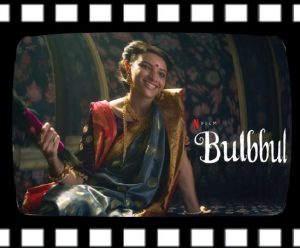 The recent Netflix release Bulbbul, written and directed by Anvita Dutta is a classic example of dark fairy tale presenting the society’s fear of accepting independent and assertive women. Bulbbul is the debut film for the lyrist and dialogue writer Anvita Dutta and fifth in the row of Anushka Sharma’s Clean Slate Films. The film too showcased the substandard condition of women in our society.

Anvita’s the unapologetic feminist approach to the script has brought the film a wave of appreciation along with partial criticism, specially from the male critics for being a female revenge saga.

Bringing alive the fascinating tales of Rabindranath Tagore and Sarat Chandra Chattopadhyay, the film set in the backdrop of 19th century Bengal manifests the colonial patriarchy, which has latch on to our society. The film starts with a series of mysterious deaths, attributed to a chudai, who is haunting men lives.

Revolving around the story of a girl, who is married into a zamindar family, the film takes a toll on the so-called progressive society thus stuck in the narrow mentality. Anvita Dutta remarkably asserts the fact that our society is very much reluctant towards the independent women and often considered them ‘dangerous’. The script speaks aloud about society’s uneasiness in accepting confident women who make their own choices and do not depend on others, particularly males.

The very first shot of the film shows a little Bulbbul sitting on a tree, swinging her legs wearing Awlata (a red dye that is applied to the hands and feet in a wedding). In the same scene, she meets her brother-in-law Satya, played by Avinash Tiwary and struck a quick friendship. Latter, unfolding the events she comes to know that Satya isn’t her husband but rather his elder brother Thakur Indranil is, played by Rahul Bose.

With the powerful storytelling and detailed cinematography; the film takes you through the journey of a little girl who is fascinated by scary stories and eventually her life turns into one. The film depicts the bitter truth of the upper-caste colonial Bengali patriarchy including the practice of child marriage to enforced widowhood and shows the horror of being women in this society.

Anvita unfolds the life events of Bulbbul in a very predictable manner, same as the patriarchy is evidently practiced in our society. Bulbbul isn’t the only woman in the film, who is the victim of patriarchy, Binodini, played by Paoli Dam reflects the strong roots of misogyny in our society. Binodini is married to the younger twin brother of Indranil, Mahender, who is developmentally challenged. Being the choti bhau, Binodini has been always bothered by the fate of the little girl of becoming the badi bahu, therefore she keeps creating hurdles in her life.

The screenplay that reads like a catalog of mystery-thriller tropes, the film is acquainted with the sufferings of women. For one instance, Bulbbul having affection for Satya as both grew up together sharing a childhood was became the reason for her husband to send Satya away and beat her up like anything. With that incident, the cheerful soul lost her innocence and the journeys of a broken woman begin.

The shot of Indraneel beating up Bulbbul in the film will not put you in shock; rather it will leave you with the thought of “knowing it all” as women are already introduced to such instances in real life.

A lot has been said about the story having a broken woman playing a witch makes the plot outdated but the question arises that what is wrong in reflecting the mirror image of the society which is still persuading the outdated and baseless rituals in modern times.

Since centuries chudails or Witches are introduced in a negative light in the text books and grandma’s stories to keep us all sacred of them and also to refrain us from questioning the very origin of their existence. Usually described as a woman who dies during childbirth or pregnancy or due to the torture by their husbands or in-laws, a witch, who comes back to avenge her wrongdoer is the one who is considered evil in the society.

Bulbbul breaks the stereotypes with her smirks smile and ability to look into the eyes of men while conversing. She doesn’t hesitate in taking charge of her own life; she is fearless; she is unstoppable.

The way Anvita unfolds the script going back in the memories alongside countering the judgmental mentality with its brilliantly written dialogues; some of the scenes will leave its mark in your mind.

In a particular scene where Satya sees Bulbbul with her doctor Sudip, played by Parambrata Chattopadhyay talking about an incident of a man beating up her wife and covering up by saying she fell from the stairs. Satya, who is already uncomfortable seeing Bulbbul and Sudip together, raises a question “what if she actually fell from the stairs” and Bulbbul’s instantly gave him a reply “the only house has stairs in this whole the village is ours”– this particular scene is enough to understand the dirty secrets buried inside big havelis and the denial mood of men to accept their faults.

Though Satya’s character is strong, well-educated and the one who never wronged Bulbbul but in that particular scene and the following one, where he goes to Binodini to enquire about Sudip and suspects Bulbbul of being close to him reflects the men-led society’s the deep-rooted habit of judging women and he came across as a victim of his very own kind “patriarchy”.

A strong and open-minded character like Staya couldn’t take Bulbbul’s closeness with doctor Sudip and decides to send her back to her maternal house as a punishment. Bulbbul responds to his decision with a hard-hitting line, ‘You all are the same’ as she was not at all surprised by his judgment. Anvita has written Staya’s character as an eye-opening that even so-called “woke” man can’t understand and sometimes disappoint the most.

On the acting front, Tripti Dimri and Avinash Tiwary both of them have done justice to their characters. This is the second film of the duo after their debut film Laila Majnu in 2018. The on-screen chemistry between Tripti and Avinash is mesmerising. While Avinash carries the mood and temper of a London-return zamindar and Tripti perfectly brings the layered personality of Bulbbul.

Despite having very few dialogues Rahul Bose plays both the character, Indraneel and Mahendra with conviction. Parambrata Chattopadhyay and Paoli Dam have also given convincing performances.

Bulbbul has received a lot of criticism of having a protagonist who is broken violently. Whereas critiques are arguing why a woman has to be broken to be empowered but in real life too people seem to rise stronger from ashes. It can be argued that why women-centric films always have the protagonist with a dark past; rather showing an independent woman without any violent history.

However, we never ask the same question to the ‘heroes’ of Hindi cinema, where you always find them having a dramatically sad past to take revenge. But then again, we have to look for the protagonist going beyond only taking revenge and forging a new and optimistic storyline.

Films like Bulbbul are more than visual pleasure; it has meaning and message which touches the elements inside our hearts and leaves us in the state of multiple thoughts.

Cinema can play a major role in nation branding initiative: ...

Martyrdom of soldiers in J&K is not mere statistics