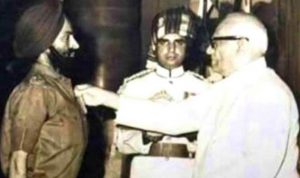 Chandpuri, who was suffering from cancer, died in a private hospital in Mohali, Punjab. He was 78.

He was a major in the Indian Army during the war of 1971. The war, which saw India defeat Pakistan, led to the liberation of Bangladesh, for which he was awarded Maha Vir Chakra by the Government of India.

Chandpuri with just 120 soldiers fought against a sizeable Pakistani infantry brigade and armoured battalion – that made him an inspirational figure for citizens at large. His inspirational leadership ensured that the approaching Pakistani enemy was forced to leave the Warfield.

Punjab Chief Minister Captain Amarinder Singh expressed grief on the demise of Kuldip Singh Chandpuri. Singh called Chandpuri “a very brave and distinguished soldier” and said that the “nation is poorer” with his death.

“Very sorry to learn of the sad demise of Brigadier KS Chandpuri, MVC. He was a very brave and distinguished soldier and the hero of the Battle of Longewala. The nation is poorer with his passing away. My heartfelt condolences to his family,” Capt. Amarinder tweeted.

A famous Bollywood movie Border was based on the battle, showcased the valiant efforts of the soldiers at Longewala. Actor Sunny Deol played Brigadier Chandpuri’s character in the movie.