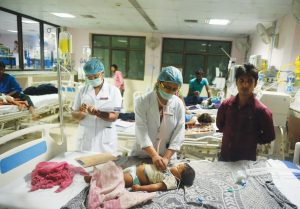 The death toll due to the outbreak of viral infection Acute Encephalitis Syndrome (AES) has reached 102 in Bihar on June 16. Muzaffarpur is the worst-hit district in the state with the death toll reaching 88 here. Three more children died in Kejriwal Hospital in Muzaffarpur where 14 deaths had been reported so far. Another 11 children died in Vaishali, two in Motihari and one in Begusarai. Meanwhile, Union Health Minister Harsh Vardhan had also visited Bihar to review the situation with the state health officials.

According to a release issued by the Muzaffarpur district administration, two children died at the SKMCH hospital here where a total of 117 cases of Acute Encephalitis Syndrome (AES) have been reported since June 1. In the private Kejriwal hospital, the total number of reported cases is 55 and seven of the children admitted since June 1 have died until June 12. Among the patients undergoing treatment, the condition of four is stated to be critical.

Meanwhile, the state’s Director-in-Chief (disease control) RD Ranjan visited the town, heading a team of Health Department officials sent from the Bihar capital, to take stock of the situation. “We can confirm the data as on June 10. Till that date, 34 deaths had taken place and 109 cases of chamki bukhar (brain fever) reported. More data is being updated. None of the deaths, so far, has been caused by AES. The casualties were a result of hypoglycemia — abnormally low level of sugar in the blood or deficiency of sodium and/or potassium – caused by intense heat and humidity,” he had said.

In Patna, Principal Secretary (Health) Sanjay Kumar said, “We have received instructions from the chief minister to ensure that preventive measures were taken in the 12 affected districts, though deaths have so far been reported from only Muzaffarpur. Stern action will be taken against officials who are found to be lax in ensuring distribution of oral rehydration solution and spreading of awareness regarding preventive steps.”

Participating at a function organised at the Indira Gandhi Institute of Medical Sciences (IGIMS) premises for laying foundation stone of a 500-bed building, Chief Minister Nitish Kumar expressed sorrow over the children’’s deaths in Muzaffarpur. “I am very pained with the children’’s deaths in Muzaffarpur. We are very hurt and pained. The Health Department has sent its team to Muzaffarpur which would take stock of the measures being taken to tackle the disease,” the chief minister said.

The Health Department principal secretary said the disease has affected 222 blocks of 12 districts, especially Muzaffarpur, Vaishali, Sheohar and East Champaran. Asked about the reasons behind the deaths, he said the reason could be that the children may be sleeping empty stomach coupled with constant high temperature, lack of water in the body and glucose level in the blood.

The department has ordered for distribution of ORS packets among the children so that they can take it before going to bed, he said, adding that it would maintain blood sugar level in the children. The deaths have taken place especially in malnourished children and also in poor and impoverished families, he said.

Sources in the health department said that most of the kids who have died belong to extremely poor families. “They sleep empty stomach. And early morning, pick up litchi (the famous fruit of Muzaffarpur) from the orchards. Consuming litchi empty stomach is quite dangerous,” said an official.

Doctors who have attended the children in the government hospitals, however, said that most of the victims reported high temperature, coupled with a deficiency of glucose/sugar in the bloodstream.

The Centre, meanwhile, has constituted a team of multi-specialists which will visit Bihar to assist the state after at least 30 children died this month.

Union health minister Harsh Vardhan, who reviewed the status of Acute Encephalitis Syndrome (AES) and Japanese Encephalitis (JE) cases in Bihar on June 11 — which was suspected to be the cause of the death — said he met state health minister Mangal Pandey a few days ago and assured him of full support and assistance by the Centre.

Sunil Kumar Sahi, superintendent of the state-run Sri Krishna Medical College and Hospital (SKMCH), said that a total of 80 children suffering from high fever and convulsions have been admitted to SKMH and Kejriwal Maternity Clinic (KMC) in the past one week. “Death toll of children plagued with symptoms of AES and the JE reached to 31 so far in this season,” he said.

CM  Nitish Kumar, who had expressed grave concern over the death of children on Monday, said that there could be several reasons for the children getting afflicted with the diseases but the best efforts should be put in to prevent death of the innocents. He urged parents to get informed about the symptoms of the two diseases and take adequate precautions.

Kumar said that while situation had been good in the past two years as deaths as a result of AES and JE was minimal, 2019 has been a bad year so far as several parents lost their kids. 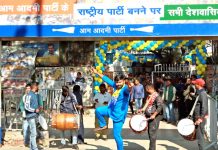 AAP gets a national stature on the back of Gujarat show