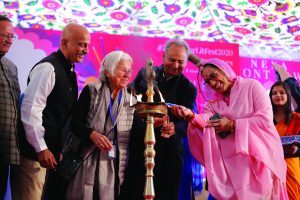 Jaipur: In its 13th year, the five-day Jaipur Literature Festival, which has gained the reputation of being the biggest festivals of the kind over these years, lived up to its cerebral glory. Concluding this week, the 13th JLF 2020 extravagantly showed off world renowned authors, Nobel Laureates, acclaimed film directors, actors, thinkers, political leaders, journalists among others in over 200 sessions, each juggling the grey matter as they pondered over books, politics, current affairs, bilateral ties et al.

Amidst a colourful backdrop of Diggi Place that has hosted JLF since its inception in 2008, this year was dominated by the burning issues closer home – the Constitution, the Centre’s narrative of it, social media, sovereignty with CAA-NRC making guest appearance at intermittent intervals.

Sanjoy K. Roy, Festival Producer emphasised enough on the power of literature in present day saying, “We all must speak with one voice- a voice filled with empathy and love for each other. Even as tribalism grows across the world, and countries build walls around them, we have to remember that finally, we are all human beings joined together on this earth by the common cause of humanity. The arts, literature, music, theatre and dance can help create an understanding and remove the fear of the ‘other’ that we all face.”

Day 1 — Celebrated American author Elizabeth Gilbert enraptured the audience in the most anticipated session, From Eat, Pray, Love to City of Girls, on the first day. The writer took a trip to the world of theatre in New York City of the 1940s, narrating a story of showgirls, playboys, actresses and dancers. Her latest novel, City of Girls, has a set of wanton and promiscuous young women who behave with incredible sexual recklessness and reap its consequences. In conversation with her long-time friend and editor, British publisher, Alexandra Pringle, Gilbert talked about her life as an author; from Eat, Pray, Love to City of Girls, her experiences as a seeker and a storyteller, her chaotic experiences with the ‘strange’ institution of marriage and her intimate connection with shame. The conversation began with a discussion on Gilbert’s experiences as a married woman, with a reference to her second novel, Committed. “I don’t like it…just don’t like it!’’ said Gilbert, as she talked about being committed to married life. The audience chortled as the session went on at the Front Lawns of the Diggi Palace.

The first day focused on sessions which explored a woman’s right to be free of every societal stereotype including sexual freedom and finding her identity in non-conventional lifestyles. Franco-Moroccan novelist, Leila Slimani, author of the unconventional Adèle, in conversation with the art-writer and curator, Avni Doshi stated tellingly that some women want to be just objects. Slimani said that the book was written out of the fascination that she has towards the phenomenon of addiction in which the protagonist Adèle is addicted to sex. 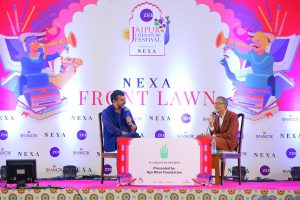 Fintan O’ Toole, award-winning Irish journalist, in a frank conversation with journalist Suhasini Haider, chose to focus on a cultural as well as historical analysis of Brexit, and the very real vulnerabilities that the decision to go along with it posits. Toole helped break down the narrative that has consciously served as a political justification in favour of the move, believing that most people do not understand the ways in which it can play out.

Nandita Das talked about Manto in Manto and I, a book of images and words that traces the journey of making Das’ film, Manto, a compelling biopic on one of the subcontinent’s most fiery and controversial writers, Saadat Hasan Manto. She candidly shared not just her creative but also her emotional, socio-political and spiritual experiences of the six years spent with the film.

Day 2 — Congress MP Shashi Tharoor stole the show on Day 2 of JLF 2020, flooring a jam-packed Front Lawn with his candour, wit and no-holds barred critique on the central government. While the session was named Shashi on Shashi, inviting the articulate leader to talk about his life, it invariably turned political with Tharoor sharply attacking the Modi government over CAA-NRC, and using Mahatma Gandhi as a prop for Swachh Bharat, “reducing him to glasses for the brand value they have”. Bestselling-author Howard Jacobson talked about his new book Live a Little, which is the love story of a 90-year-old woman. Age, according to Jacobson, is not an impediment to love, though literature has been “very unforgiving” of old age. Jacobson went on to say, “The most intelligent people I know are in their 90s”, and explained “…if you can allow your body to decay, you can concentrate on your mind!” The eroticism in this love story is only suggested. This is because Jacobson thinks that “the body is overrated”, and therefore he wants to start a movement against people writing about sex. “Sex makes words look foolish, words make sex look absurd,” he said. 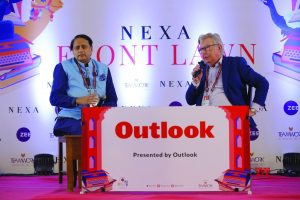 Lisa Ray, India’s first supermodel, and a cancer-survivor, spoke about her life story and memoir, Close to the Bone, a moving account of her healing and spiritual quest. She spoke about how identity to her was tectonic and rooted in movement, embodied by her own peripatetic life.

At a session dedicated to Indian languages, Rajasthani Sahitya Akademi awardees across generations — Chandra Prakash Deval, Raju Ram Bijarniya and Madhu Acharya, spoke of the rich heritage of the state as also the unique genius of Rajasthani literature, which “ironically” still awaits official recognition in the schedule of Indian languages. In conversation with editor Sudha Sadanand, acclaimed vocalist Shubha Mudgal read from and spoke about her debut collection of short stories, Looking for Miss Sargam, and the traditions, realities and contradictions that a musician typically straddles and set them against the realities of her own narratives.

Day 3 — ‘Of the People, By the People: The Indian Constitution’, how the Constitution of India, that turned 70 in 2020, came into being. Commemorating the eve of the 70th Republic Day, the session featured senior Cognress leader Margaret Alva, former Chief Election Commissioner Navin Chawla among other. During the discussion, Chawla said, “People mustn’t lose faith in our institutions, in our Constitution. It’s time we must empower them, the Election Commission, the Supreme Court.”

In another session by food writer and actor Madhur Jaffrey, she spoke about her life and how food became a natural part of it. She shared her experience of growing up in a joint family in Old Delhi, where delicious food was available aplenty. While the women of the family ate Hindu food, the men, who had been serving in the Mughal court, ate meat, thus exposing her to a wide variety of delicious dishes. Nicholas Coleridge, in his memoir The Glossy Years, gave a glimpse into the world of glossy magazines through personal experiences and anecdotes.

In ‘Shikara: The Untold Story of Kashmiri Pandits’ screenwriter and producer Vidhu Vinod Chopra talked about his upcoming film Shikara set against the Valley. Described as a love letter to the land, it is a moving account of the “true story” of the exodus of Kashmiri pandits in 1990. Sharing his inspiration in making the film, Chopra said, “In 2008, I began making a film on Kashmir. Shikara is a tribute to my mother. But it is also a tribute to all the mothers that have been exiled out of their homes in Kashmir.”

Day 4 — Nobel Laureate Abhijit Banerjee was the most looked forward to speaker on the fourth day of JLF 2020. In conversation with Sreenivasan Jain, Banerjee shared some important achievements of his and his organisation J-PAL’s journey.

At a session on Shakespeare and politics, American Shakespearean, literary historian, and author Stephen Greenblatt, introduced by Vishal Bhardwaj, was posed a riveting question if the state ever tried to end Shakespeare’s career for his dissent. “During the time of Shakespeare, the state allowed an ‘opaque screen’, in which certain uncomfortable things could be expressed. The authorities knew that tearing that screen was dangerous,” he said. On being asked about Shakespeare’s anti-Semitic tendencies expressed in some of his plays, Greenblatt said, “Shakespeare was not an artist of the enlightenment; he and his contemporaries were born a long time before that. You will also find instances of misogyny in his work and for example, his treatment of his wife is well-known. There is, however, a deep humanism in Shakespeare’s work that he doesn’t let his characters, no matter how central or peripheral, remain the ‘right size’. This, to me, is more important than political correctness in the case of Shakespeare.” 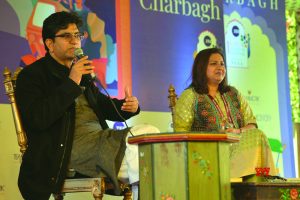 Kashmir: Of Barbed Wires and Almond Blossoms was a session that explored the paradoxes and polarities that define the region in the context of the human, the personal and the political. Poet, teacher and academic Asiya Zahoor has written articles and poems on issues of the politics of place, diaspora, the literature of exile and Muslim identity.

Day 5 — Conversations on the final day showcased a multiplicity of voices, from feisty novelists to experts and policy veterans, reflecting the truly global and relevant reach of the festival.

In an engaging session, fashion designer Manish Malhotra talked about his journey of 30 years in Bollywood. Sharing his thought on what inspires or motivates him the most Malhotra said, “It’s okay to be wrong and make mistakes. All we have to do is to wake up the next day and say ‘it’s a new day’. We have to relentlessly keep working and wait for time to get back to us with results. The idea is to consistently re-invent yourself and not let filtered or layered opinions influence your works.”

The day ended with the closing debate on if social media has divided society, heatedly debated by senior journalists including Siddharth Vardarajan, Faye D Souza, Rana Ayyub among other. Vardarajan pointed, “We forget who uses social media, what use they put it to. Medium does not divide society — don’t get worked up about it. We need to distinguish between those who use it as a method of communication and who use it as a method of division… I won’t name the villains but I urge all of you use social media in a creative and constructive manner to fight them.”

Speaking for the motion, columnist and professor Makarand R. Paranjape said, “Social media does divide us in our convictions, but it unites us in our addictions. The worst of users can function under a fake screen; our terrible inner tendencies find a channel. We need to humanise our social media interactions.”

John Lanchester brought the session to an end with these words: “We are living in a strange space. This stuff (social media) is new; it’s powerful. We haven’t developed the antibodies to resist it yet. However, I am sure that we eventually will and our grandchildren will ask us about this chaotic period of transition and if it really was like that.”

Ayyub, meanwhile, was clear, “Social media shows a reflection of what society already is. In some cases, social media amplifies the voices of the dispossessed such as the protestors of Shaheen Bagh.” Faye D’Souza felt, “Social media allows individuals to have the power to spread viral messages. You can buy ‘virality’. Social media often takes away the nuance of our opinion.” 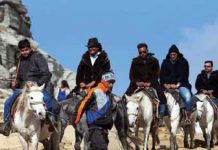