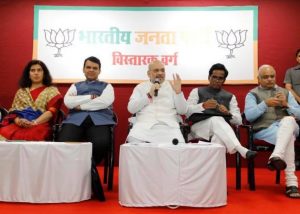 BJP president Amit Shah, on Sunday told his party workers to be strong and prepare to fight alone in 2019 Lok Sabha elections in Maharashtra.

The decision came after Shiv Sena boycotted the no-confidence motion in the Lok Sabha on Friday and kept on supporting Congress President Rahul Gandhi despite his uncontrolled attack on the BJP and Prime Minister Modi.

Amit Shah spoke to party workers and told them to fight solo in 2019 elections in Maharashtra. He laid down a 23-point working strategy and discussed topics such as increasing the party strength, addressing new voters’ groups based on their profession, gender, liking’s etc.

The party is anticipated to release a list of people to be in-charge of the 48 parliamentary constituencies in the state.

No official announcement has been made by BJP on the aforesaid. Earlier the two parties had contested the parliamentary elections as associates in the year 2014, while the assembly elections were fought separately by both the parties.

The main objective apart from the meeting is to increase the network of the BJP in different geographies.