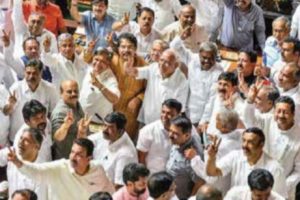 The ruling Bharatiya Janta Party government in Karnataka led by B.S. Yediyurappa has not only survived but has expanded its support base to southern parts of the state.

A major outcome of the by poll results is that the BJP which had main support base in northern Karnataka has now expanded its base to Vokkaliga hearland. Particularly Chikkaballapura and KR Pete seats that BJP won this time had never come to party fold earlier.

The win in KR Pete in the sugarcane growing district of Mandya was probably its sweetest as it is the first time the BJP has won any elected representation from this Vokkaliga dominated region, indicating the waning influence of former prime minister HD Deve Gowda and Kumaraswamy, who put their might to defeat Narayan Gowda of the BJP.

In fact, the ruling BJP has swept the Karnataka assembly by polls, winning 12 of 15 seats. Chief Minister BS Yediyurappa’s four-month-old government needed only seven seats for a majority. With this the Yeddyurappa government has survived. The biggest loser in the by-elections is Congress that has managed to win just two seats, losing 6 seats while its ally JDS lost three seats and failed to win even a single seat. The results of these by-elections have given a new life to the Yeddyurappa government.

Now the BJP has 117 members in the 222 members Assembly. The BJP had 105 members before the by-election and it need seven more seats to touch the majority mark of 112 seats. One seat went to an independent. Two seats are still vacant in Karnataka due to a legal dispute. Voting for these by-elections was held on December 5 and about 62.18 per cent people exercised their franchise. There was a triangular contest between BJP, Congress and JDS for all the seats.

Indeed, voters in Karnataka have handed over a decisive mandate to help stabilize the four-month old Bharatiya Janata Party government led by B.S.Yediyurappa. The mandate shows that 11 out of the 13 disqualified legislators who had led to the downfall of H.D. Kumaraswamy-led coalition government have won. After the results were announced, Yediyurappa said that “In the remaining three and a half years, I along with my cabinet and legislators will give good governance and aim to win 150 seats in the next elections.”

Congress leader Siddaramaiah accepted the defeat and said, “I was expecting that the voters of these constituencies will teach them a lesson for having defected to the BJP.” The BJP sweep had an immediate fallout in the Opposition Congress with its legislature party leader and former chief minister Siddaramaiah and state Congress chief Dinesh Gundu Rao quitting their posts. Citing moral grounds, the two leaders have tendered resignations to Sonia Gandhi.