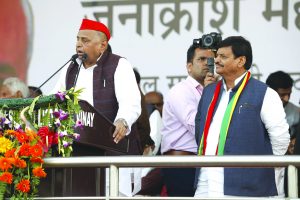 The disintegration of ‘Samajwadi Parivar’ has given a reason to ruling Bhartiya Janata Party to smile at their infighting that reached at its peak of no return. The electorate in Uttar Pradesh is very confused over the way family feud is dividing its vote bank. Samajwadi patriarch Mulayam Singh Yadav, who is under pressure of CBI investigations into pending cases of disproportionate assets, is trying to play balancing role but now situation appears to be going out of his hand.

Offended with the continuous insulting avoidance and neglecting behaviour on the part of his nephew Akhilesh Yadav, a visibly upset Shivpal Singh Yadav floated his own political outfit-‘Pragatisheel Samajwadi Party (Lohia),’ PSP-L and organised a big rally in Lucknow to show off his political strength and maneuverings skills. The unexpected presence of Samajwadi patriarch Mulayam Singh Yadav in the rally puzzled many of his supporters, who are in a dilemma over to which side they go to remain blessed? Shivpal was just dumbfounded when he saw that his elder brother on the dais and being escorted by his younger ambitious daughter-in-law, Aprna Yadav, who is Akhilesh Yadav’s bête norie.

Highly charged Shivpal Yadav tried to clear circumstances that forced him to walkout from Samajwadi Party, despite being its founder member. Addressing ‘Janakrosh Rally’ organised by his newly formed party PSP-L, he said pointing his brother Mulayam, “I formed new party after obtaining your permission in presence of Bhagwati Singh and Ram Nareshji. I never asked for any post or position and always abided Netaji’s (Mulayam Singh) orders. I even respected elders and younger family members and obeyed their orders.” “What I least expected,-due respect for you and me. But neither he obeyed you nor listen to me,” he lamented. Shivpal Singh blamed the coterie of some baseless sycophants around Akhilesh for escalating family feud that ultimately compelled him to form new political party with neglected loyalists of Samajwadi Party.

Mulayam Singh Yadav, while addressing the gathering, started speaking about the Samajwadi Party forgetting that he was addressing a rally of its rival faction — PSPL, thereby leaving Shivpal Yadav embarrassed. “The Samajwadi Party take along everyone with it, treats all human beings as equal irrespective of their caste and religion, to make the party stronger,” he unmindfully asserted, leaving Shivpal Yadav visibly flummoxed as his supporters started disrupting his address. Mulayam Singh Yadav stopped referring to the Akhilesh led Samajwadi Party only after the PSPL chief Shivpal elbowed him to his senses.

Thereafter Mulayam Singh congratulated Shivpal for organizing such a mammoth gathering in the history of Lucknow. Touching his head he said, “Shivpal have my blessings. He appealed the gathering to support PSPL” A day before the rally, Shivpal remained tight-lipped to a question as to whether Samajwadi patriarch Mulayam Singh Yadav would attend his rally. It was relevant in view of his mysterious skip from celebrations organised by Shivpal on his birthday.

Pulling huge crowd in the rally, overwhelmed Shivpal Singh Yadav attacked policies of Prime Minister Narendra Modi and blamed BJP for creating social tensions and disrupting communal harmony in the state. He alleged ever since BJP came to power Muslims are in reign of terror and tension as a brother is pitted against another. Small traders are in depression over GST. Farmers are facing crisis, as they are not getting adequate price of their produce and committing suicides. Cane growers are harassed due to non-clearance of their long pending dues. The youths are facing challenges of unemployment.

Shivpal Yadav said there should not be any temple on the disputed land and added that the Supreme Court orders be honoured in the matter. “The need is to remove the current government, which is dishonest, useless and false. I and ‘Netaji’ (Mulayam Singh Yadav) are with the Muslims,” Shivpal Yadav remarked. “If the temple is to be built, then a piece of land can be searched on the banks of the Saryu River. There is no dearth of land for the government,” he added.

He also hit out at the saffron party and alleged that BJP had weakened the country and it wanted to “instigate riots” for political gains in the 2019 Lok Sabha elections. The BJP has weakened the country. We will oust them from power at the Centre and in Uttar Pradesh. We want peace and brotherhood but the communal people want to instigate riots. He also expressed the possibility of rigging through EVMs.

Amid positive response from the supporters, Shivpal urged the masses to support his newly formed party, as it will cater the needs of all section of society, especially backwards, Muslims and poor upper caste people for whom he pleaded for reservation on economic grounds. He also promised the employees to restore old pension system and regularization of contractual employees working for more than 10-15 years. Condemning the policies of BJP government Shivpal urged to dislodge Modi government from center in upcoming Lok Sabha elections. He offered position of party chief to Mulayam Singh and urged him to fight as his party’s nominee from Mainpuri.

The people of state are puzzled over the belligerent assertions of Shivpal Singh Yadav against BJP. In fact, Shivpal is receiving benevolent gestures from Yogi Adityanath government. State government had recently allotted a sprawling bungalow at Lal Bahadur Shastri Marg, vacated by BSP president Mayawati on Supreme Court orders, to Shivpal Yadav from where he is waging war against his own nephew Akhilesh Yadav.

Political observers are surprised why despite forming separate political outfit by party rebellions with his uncle, Akhilesh Yadav has not initiated disciplinary action against them. He has not even filed petitions before the Speaker of legislative assembly for disqualification of their membership from the house.

The emergence of Shivpal is all set to divide secular votes and give a big jolt to Akhilesh Yadav led Samajwadi Party. The success of this rally once again established beyond doubt that he is at grassroots of the party cadre that was cultivated by Mulayam Singh Yadav-OBC-Muslims combination. Three sitting MLA including Hariom, Amanmani Tripathi and more than 17 former MLA and ministers including Shadab Fatima, Kamar Yusuf Pramod Gupta were seen in his rally. Shivpal has better acceptability among the leaders of secular front as he has a better control on the cadre of the party being its foremost organiser.