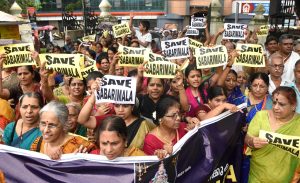 For the Bharatiya Janata Party (BJP), the Sabarimala devotees’ protest against the entry of menstruating women into the sanctum sanctorum has come as just the issue it hopes will help it crack Kerala, a state that has been a no-go area for it so far. The BJP has already announced to take out a Sabarimala Yatra from November 8 to tap into and channelise the people’s anger into firm electoral gains in the general elections to Lok Sabha round the corner.

The BJP Kerala unit has come out strongly in support of protesting devotees, against whom the state government has unleashed a crackdown. So far, over 3500 protesters have been arrested by the police for alleged violence and intimidation of women who tried to enter the Sabarimala temple when it opened for five days in October. The protests across the state were so effective that the government failed to implement the SC order and enable entry of women who came forward to enter the shrine.

BJP Kerala unit president PS Sreedharan Pillai has announced a rath (chariot) yatra starting on November 8 from Kasargod to Sabarimala in a bid to gain politically. Interestingly, even the Congress was tepid in its reaction to SC verdict and extended support to the protesters, but in the competition to win over the devotees, the BJP appears to be far ahead.

“We see a major Hindu consolidation on Sabarimala. Anger is visible everywhere. For the first time many major communities came together to check the assault on Hindu customs and tradition,” said BJP general secretary K Surendran. BJP president Amit Shah has directed his party men to work with and support all protest movements and also try to woo the two powerful communities, the Nairs and the backward Ezhavas, who together form 54 per cent of Kerala population.

The Congress is treading cautiously whereas the BJP has launched an aggressive campaign as it is sure the  Sabarimala issue will give the party a foothold in Kerala. The  Congress and the Left have prevailed in the state till now, alternately running the government. The BJP is also strengthening its unit in the state and has inducted former ISRO chief Madhavan Nair and former president of Travancore Dewasom Board G Raman Nair into the party.

The BJP is also planning to hold protests over the issue in other South Indian states as Ayyappa devotees come from all these regions. Analysts are, however, unsure as to whether the issue will help the BJP electorally and to what extent.

The whole controversy and the fast-paced developments in the temple town have exposed the state government’s complete failure in implementing the Supreme Court order. For the present the temple is closed after five days, as is the practice and the temple will open again next month. It remains to be seen if the government comes out with a concrete plan to implement the court orders or gives in to the increasing pressure from the devotees.

BJP chief Amit Shah attacked the CPM led Left Front state government saying it was playing with fire by applying brute force on devotees and declared that the BJP will stand firmly with the devotees. His remarks over the SC verdict that it should refrain from giving judgments on issues of faith were construed as an attack on the judiciary by the opposition leaders. Shah listed out previous judgments that were not implemented that included jallikattu, prohibiting loudspeakers in mosques and said impractical directions should not be given by the courts.

Amit Shah also had an advice to the Kerala s chief minister. “You concentrate on developing the state rather than attacking the Ayyappa bhakts,”  he said and warned him that “we will not hesitate to pull down the government.”

Kerala Chief Minister Pinarai Vijayan hit back strongly saying that we are an elected government, elected by the people of the state. Instead, the BJP should try to win seats, he said. But he took serious exception to the BJP president’s comments on the court verdict. The CM wrote in his Facebook post, “His statement that the apex court should pronounce verdicts that are implementable is nothing but a challenge to the various rights that the Constitution guarantees.”

“This clearly shows what’s on the mind of Shah is the same that’s there in the minds of the Sangh parivar forces,” the Kerala CM said.

“The statement that women should not be allowed entry clearly shows that they (BJP) stand for the male hegemony. I wish to state that this government was elected by the people and not with the help or support of the BJP. People who support democracy should come out against this statement,” the Kerala chief minister said.

The BJP president had lamented that the state of Kerala was under an emergency. “The state is under another emergency. Even women are not spared and they are getting arrested late at night,” he said.

Responding to the BJP chief’s threats, the Kerala CM said: “It is a democratically elected government. We came to power, not due to Amit Shah’s largesse. He is threatening the government for trying to implement the order of the highest court of the country.”

There is a big conspiracy to turn the sacred temple into a war zone, the chief minister told media persons after the temple closed till next month.

“The RSS is responsible for the violence that the state has never witnessed before… It is desperate to gain a foothold and resorting to dirty tricks of every kind,” the chief minister said, adding it is sad that the Congress had also parked itself on the RSS side.

None of the 12 women who tried to enter the temple was prevented by the protesters, despite security given to the women.

For the present, there is calm before the storm in Kerala as the temple reopens next month. It remains to be seen as to how the government deals with the situation and tackles the protesters so far, clearly it has failed. With the BJP declaring to step up the ante, Sabarimala and Kerala will continue to be in news for a long time to come.

For the BJP it is Ram Mandir in North India and Sabarimala in South India that it thinks could help it electorally. The Congress reflects its confused stance with its chief going temple hopping, it is unable to take a firm stand  on Sabarimala. 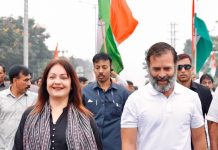 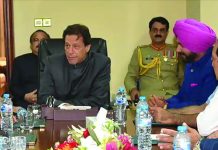