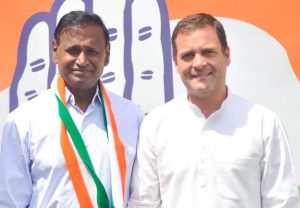 Dalit leader Udit Raj, who was denied a ticket by the Bharatiya Janata Party (BJP) in the Lok Sabha elections, joined the Congress party on Wednesday.

The BJP’s MP from North West Delhi Udit Raj had said on Tuesday that he will resign from the party if he was denied a BJP ticket in the ongoing Lok Sabha elections.

The BJP dropped Udit Raj as a candidate and replaced him with singer-politician Hans Raj Hans in the North West Delhi seat on Tuesday.

Udit Raj tweeted on April 22, “I am waiting for ticket if not given to me I will do good bye to party.”

“I still hopeful that I will file nomination from my constituency and BJP where I have worked hard and proved my metal. I hope I will not be forced to leave BJP by BJP itself,” he added.