BJP leader Ghulam Qadir on Tuesday evening escaped a terror attack when a terrorist fired on him at Nunar Ganderbal in Jammu and Kashmir.

In the attack, Ghulam’s personal security officer (PSO) Altaf was martyred. He got critically injured in the retaliatory fire. The terrorist was also killed in the crossfire.

“Our critically injured colleague Ct Altaf ( PSO) attained #martyrdom. He sat an example of #professionalism & #bravery. We are proud of him. May his soul Rest In Peace,” Kashmir Zone Police said in a tweet.

Earlier Kashmir Zone Police tweeted, “#Terrorist fired upon one BJP worker at Nunar #Ganderbal. He is safe, howerever, his one PSO was injured in this incident. One unidentified #terrorist got #killed in PSOs retaliation.” 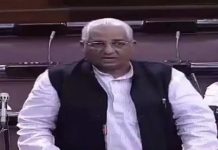