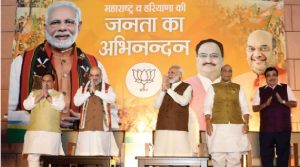 The results of the latest assembly elections in Maharashtra and Haryana have come as a surprise as everyone was expecting Bharatiya Janata Party (BJP) to win both the states comfortably. The saffron party’s underwhelming show in the two-state assembly elections, especially in Haryana, has left it with issues to ponder on even though it looked set to form governments there as well as in Maharashtra.

The poll outcome in Haryana showed that the “micro issues” have apparently played a role in the party’s below-par performance in the state, where it built its campaign around “macro issues” like abrogation of Article 370. Local factors also played a key role in Maharashtra, where the saffron party did not get an overwhelming mandate as it was hoping for.

The BJP, in alliance with the Shiv Sena, managed to win Maharashtra by bagging 161 seats in a 288-member assembly compared to 185 in 2014, when they had contested separately. However, the opposition seemed to have emerged stronger amid fightback from the Nationalist Congress Party (NCP). The Congress-NCP alliance garnered 98 seats. The two parties had contested the 2014 elections separately, and, between them, won 83 seats.

In Haryana, where the BJP won 47 seats in the 90-member assembly in 2014, the party emerged the single largest force, but won 40 seats, six short of a simple majority. The Congress, which surprised everyone, winning 31 seats, more than double of the 15 it did in 2014. And the Jannayak Janata Party (JJP), a splinter group of the Indian National Lok Dal, won 10 seats. The BJP is still best placed to form a government in Haryana. In a way, an incumbent returning to power in a state is creditable.

The wide margin between the party’s vote share in the recent Lok Sabha polls and the latest assembly elections suggests that voters are driven by different factors in different elections, and the BJP’s effort to frame every contest around issues like nationalism to subsume local bread and butter issues may not hit the bull’s-eye every time.

Agrarian issues and large scale defection of opposition leaders to the BJP, according to some experts, may have worked adversely against the party’s interest in Maharashtra.

Asked if NCP veteran Sharad Pawar managed the issue of Enforcement Directorate registering a case against him during elections to his advantage by projecting himself as a victim of political vendetta, a saffron party leader was quoted as saying that it was certainly “bad optics” for the BJP.

In Haryana, a consolidation of votes of Jats, the largest community in the state, against the BJP was seen as crucial in harming the party’s prospects. The Congress, which failed to bag even one seat in the Lok Sabha polls in Haryana, won or was ahead in 31 of the 90 seats at stake compared to its previous tally of 15.

From the 58 per cent vote share the BJP had in the Lok Sabha polls, it fell to 36.5 per cent in the assembly polls.

In Maharashtra, the BJP’s tally in the 288-member Assembly was 105 while it was 57 for the Sena. In the 2014 polls, the BJP and the Sena won 122 and 63 seats respectively. They had then contested separately. The saffron alliance vote share stood at 42 per cent against 51 per cent in the parliamentary polls. Allies of the BJP may feel boosted by the results as it will now have to depend more on a party like Shiv Sena, which was feeling increasing marginalised since 2014 as the BJP replaced it as the senior partner.

Grover and Kamboj lost to their rivals by just over 2,000 votes, whereas other ministers faced defeat by over 10,000 votes. Lone woman minister in the Khattar cabinet, Kavita Jain, a three-time MLA, lost her traditional Sonipat seat to Surender Panwar of the Congress by a margin of over 32,000 votes. Among the other prominent faces for the ruling BJP who tasted defeat in the elections was its state president Subhash Barala.

The Congress witnessed a major upset in Kaithal, where senior party leader Randeep Singh Surjewala lost to BJP’s Leela Ram. The three-time legislator and Congress Party’s chief spokesperson was defeated by a margin of 1,246 votes. It was a second blow to Surjewala, who had tasted defeat in the Jind byelections early this year.

Congress candidate and former Haryana Assembly speaker Kuldeep Sharma also faced defeat at the hands of BJP nominee Nirmal Rani from Ganaur. Kuldeep Sharma was defeated with a margin of over 10,000 votes.

Former BCCI president Ranbir Singh Mahendra’s defeat was another setback for the party. He lost to JJP’s Naina Chauatla from Badhra with a margin of over 13,000 votes. Senior Congress leaders Karan Dalal and Anand Singh Dangi also faced defeat.

While Dalal was trounced by BJP candidate Deepak Mangla from Palwal, Dangi lost to independent candidate Balraj Kundu from Meham. Congress candidate Ashok Arora, who switched over from the INLD before the polls, was defeated by BJP’s Subhash Sudha from Thanesar.

Lessons to be learnt

Assembly elections in Haryana and Maharashtra highlight a handful of interesting facts. First, democracy continues to prosper in the country. The October 24 results suggest that there is still political space for a party or combine opposed to the BJP. Voters have again proved that they are smarter than politicians, analysts, pollsters, and journalists.

As a corollary, the results should bury the entirely unfounded perception that the BJP wins by manipulating electronic voting machines.

Second, the BJP and Prime Minister Narendra Modi are invincible at the national level, but at the local level, neither the party, nor its local leaders are. The party can be beaten — as proved by by-elections, and assembly elections, ahead of the national elections. And the party can be beaten — as the NCP, the Congress in Haryana and the JJP have proved — even at a time when the Opposition’s morale is at its lowest, and even, ironically, in their defeat.

Third, local issues, politics and leaders are important. The Congress, which did not have a popular local leader in Maharashtra, now faces the ignominy of being the fourth party in the state in terms of seats won. The NCP was led by Sharad Pawar, 79, who, despite his indifferent health, campaigned tirelessly and led from the front. And in Haryana, Bhupinder Singh Hooda, 72, who was finally given a free hand by the Congress only as recently as a few weeks ago, helped the party expand considerably. Yet again, the Congress has been served a lesson on the importance of strong local leaders. The latest Assembly results may also force BJP ponder on strategy to reduce dependence on Modi to win elections.

Being the first after the recent Lok Sabha polls, the Haryana and Maharashtra votings mark the beginning of the next round of assembly elections.