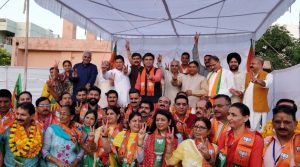 Both Prime Minister Narendra Modi and the BJP president Amit Shah were effusive in their praise of the people of J&K for the remarkable performance of the Hindutva party in the just concluded municipal bodies polls. More importantly, the party won 97 seats in Kashmir Valley, ironically in the state’s separatist stronghold.

But on ground, the reality was largely contrary to what was being projected. The polls witnessed a widespread boycott in the Valley, so much so, that 76 of the BJP’s 97 seats were won unopposed. And, a significant number of the candidates fielded by the party didn’t live in the localities they contested from but a minimum of 300 kilometres away.

In Jammu, the BJP emerged as the single largest party. But in Ladakh, the party drew a blank.

The participation was so meagre that a total of a four and a half per cent cast their vote over the four successive phases in the Valley. In a Baramulla ward, a candidate won by his solitary vote. What is more, voters didn’t know who was contesting the election. Their names were kept under wraps until the day of the polls. Nor was their any election campaigning.

One major takeaway from the polls is the boycott in Kashmir Valley and what it entails for the state going forward. First time the state witnessed boycott on such an extensive scale was during Parliament polls in 1989 when militancy has just begun. The elections that followed saw an increasing participation of the people. Only exception was the last year’s Lok Sabha bypoll for Srinagar constituency which was not only boycotted but resisted too, leading to loss of eight lives.

So, has the situation in the Valley regressed to 1989? The answer, the general opinion in Kashmir goes, is yes.

“In fact, the situation in some aspects is worse off. The boycott this time is largely voluntary,” said Naseer Ahmad, a columnist. “This shows how far Kashmir has drifted away from the political mainstream”.

Omens for the near future are thus grim. And after the boycott of the civic polls, few see chances of any participation in the Panchayat polls in November or the general elections next year.   And this alienation, in turn, imperils the electoral politics in the Valley. And its biggest victims are the major regional political forces like National Conference and People’s Democratic Party, the two parties which have alternately ruled Kashmir in alliance with a national party like Congress or the BJP. They have boycotted the ongoing civic polls pending an assurance from the centre that it wouldn’t scrap the Article 35A, the state subject law that bars outsiders from settling in the state. With no such assurance coming along, National Conference has even threatened to boycott the Assembly and Parliament polls.

This has left the field open for the Congress and BJP and the other smaller parties. Only well-known Kashmiri party in the fray is the People’s Conference led by Sajjad Gani Lone, a BJP ally. And as the results  reveal, Congress and the BJP have won a major chunk of the wards. Ironically the BJP has won even from the separatist bastions like Anantnag.

But the truth is far from helping improve the situation, the massively boycotted polls have only ended up putting the grim situation in the Valley in a sharp relief. Alienation is total which in turn is a comment on the handling of Kashmir by the Modi government.

“In more than four years of the NDA government there is very little that has changed in the Valley. The Kashmir remains in a time warp, struggling to get rid of the lingering bitter conflict that has plagued the state since India and Pakistan won their freedom from the imperial yoke,” said political commentator Gowhar Geelani. “Ever since while the two countries have gone on with their respective destinies, Kashmiris have remained hopelessly mired in the conflict. And the BJP Government has only added to it”.

True, the NDA government at the centre has refused to politically engage Kashmir. It has acted against dissident groups like Hurriyat. The centre’s only response to the situation has been the use of more force. After the occasional and half-hearted attempts at a political engagement in the appointment of the interlocutor Dineshwar Sharma, New Delhi has given up all pretence of any outreach. No political engagement has been initiated with the representatives of the Azadi sentiment. For the BJP, the priority has been the successive elections in different states of India. Similarly, the engagement with Pakistan is unlikely to restore anytime soon.

“This has created a deep vacuum in Kashmir,” said political analyst Dr Gull Wani. “And it can’t be addressed by a security centric approach. A political process and engagement is long overdue”.

But such a process, admits Wani, is unlikely to start in an election year. “With the union government already in election mode, any rethink on Kashmir policy may not happen,” Wani said. “For that we will have to wait for the new government at the centre”.

The political chorus in Kashmir is for a return to former prime minister Atal Bihari Vajpayee’s approach to the trouble in the state. The PDP is the biggest votary for a throwback to this policy with its leader Mehbooba Mufti never tiring of making a strong pitch for it. Looking back, if any policy did make a redeeming difference, it was a policy of reconciliation and engagement towards Kashmir and Pakistan pursued by New Delhi from 2002 onwards to 2007. The policy was begun by Vajpayee, a BJP leader, and taken forward by his successor Manmohan Singh through his first term.

“The policy had greatly reduced militancy in Valley and helped build a momentum towards the resolution of Kashmir,” said a PDP leader. “If anything is urgently needed to address today’s Kashmir situation, it is to return to the same processes and policies. We
urgently need a reversal of current hardline policy on the state”.