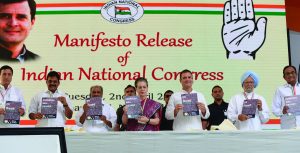 For the first time ever, the BJP is contesting more seats than the Congress in the general election. The BJP contested 433 seats in 2009 general election, 428 seats in 2014 and 437 in ongoing 2019 elections. The BJP has fielded 437 candidates for the Lok Sabha poll 2019 as against 423 of Congress. Significantly, during 2014 Modi wave, the BJP had declared 428 candidates as against 464 of the Congress and 503 of the Bahujan Samaj Party. The BSP had declared 500 candidates in 2009.

However, in 2019, 139 candidates are contesting on BSP symbol. The highest number of candidates of BJP in 2019 perhaps speak of its growing relevance in the country or as it claims as the largest political party of the world. The election at the time of writing this piece is midway and polling for half of the seats is already over. There are two ways to understand the election, and its possible outcome.

Most surveys suggest that Prime Minister, Narendra Modi remains by far the most popular national leader. He is the favourite to be PM. The reasons to support him vary from perceptions of his strength and decisiveness to absence of alternatives or a fear of a weak coalition. But there is another simultaneous process underway which underlines the fact of a resurgent Congress and emergence of strong regional parties.

Coupled with the emergence of resurgent Congress and joining of some regional parties, the ruling BJP appears to face the burden of anti-incumbency since there is a BJP government at the Centre and in most states. There is rebellion in some states by those who have failed to get tickets and in many cases the opposition has stronger candidates. As far as issues are concerned, it is nationalism narrative versus local issues of bread and butter, the issues of unemployment and farm sector problems. Modi’s popularity is the BJP’s strength, but will it be enough to offset all the local vulnerabilities of the party?

The declaration of 437 candidates is a sign of the ruling party’s growth pan India in the past few years. The 2014 was a turning point for Indian politics, after decades of the Congress in pole position and BJP coming to power on its own. The election decimated Congress to 44, its poorest performance ever. The fact is that the high number of 437 seats being contested by the BJP point out to another truth that this party failed to muster alliance with any party in some states.

For example, the BJP is not in alliance with any party in either Andhra Pradesh or Telangana and has fielded candidates on all 42 Lok Sabha seats of these states. In 2009, the BJP contested 433 seats across the country and the Congress 440. The BJP ended up with 116 seats. The Congress won 206, and took power along with its alliance partners in the UPA. The next election in 2014 saw the BJP contesting 428 seats and registering victory in 282 seats.

Now a talk about the manifestoes of the BJP and the Congress. The BJP manifesto cover shows Prime Minister Narendra Modi, and the back page features Syama Prasad Mookerjee, Deen Dayal Upadhyaya and Atal Behari Vajpayee assuring ideological continuity. Terms like “surgical strike” and “zero tolerance towards terrorism” are there to focus on national security. The BJP’s vote pitch expectedly revolves around the theme of nationalism and emotions generated around the surgical and Balakot strikes. The party manifesto called ‘Sankalp Patra’puts national security on a high pedestal, pledging a higher defence spending.

The Hindutva card is visible once again as Ram temple issue again comes to the forefront. There is no mention of removing Article 370 but promise to remove Article 35(A). The promise to invest 25 lakh crore in the agri-rural sector attractively ensures a promising future to the farmers as agri crisis have deepened further in the country. There is a promise of 33 per cent quota to women in the BJP’s Sankalap Patra or manifesto to woo voters.

While, the BJP promises in its Sankalap Patra measures to make life easier for farmers, the poor and the women, the Congress has come out with a promise to remove poverty akin to its earlier slogan of garibi hatao. Congress president Rahul Gandhi’s Nyuntam Aay Yojana (NYAY), a minimum income scheme for the poor, is alluring as it offers to bridge the difference between what a poor family earns and 12,000 per month, beyond which a person is not considered poor. That 20 per cent in India are below the poverty line is a shameful statistic.

Although progress has been made since Independence, efforts to address this have fallen short of expectations. Jobs are hard to come by and for the most part, the woes of the poor fail to attract attention, let alone find redress. The Congress has a long history of promising much and not delivering as much. Economists are struggling to understand how NYAY would be funded. Giving Rs 72000 per year to India’s poorest 20% households under the Nyuntam Aay Yojana (NYAY) is the biggest poll promise of the Congress in these elections.

The party has been peddling two kinds of justifications for it. First, the scheme has been described as some sort of last-mile assault on poverty in India. The second justification is to market NYAY as a stimulus to the economy, which has been subject to deflationary shocks through policies such as demonetisation. Congress president Rahul Gandhi and other leaders have been talking about NYAY being a policy to re-monetise the economy.

In a strikingly ambitious move to cover 50 million of the poorest Indian families. The Congress hopes that with the announcement, the Bharatiya Janata Party’s perceived surge after the Balakot strikes will diminish; conversation will shift back to core livelihood and welfare issues; the allure of what is a rather substantial degree of income support will galvanise the most deprived of Indian voters solidly behind the party; and Gandhi would clearly get positioned as someone setting the agenda rather than just responding to the government.

However, for any party to explain its policy intent, it has to finally rely on its organisational network for communication. The Congress, with the Shakti network, is trying to reach every nook and corner. This brings up the question whether the party has a long-term vision about what it wants to achieve with NYAY. For example, sustained payments of 72,000 year to the poorest (who are more likely to be from socially deprived groups) could fundamentally alter the socio-economic balance of power in villages.

To Congress advantage, the state polls at the end of last year 2018 showed an increase in the disillusionment of tribals with the BJP in Madhya Pradesh, Rajasthan and Chhattisgarh. It is not clear how this will play out in UP and if Congress reaches out to poor, particularly Scheduled Castes, the Congress can make the contest truly triangular.