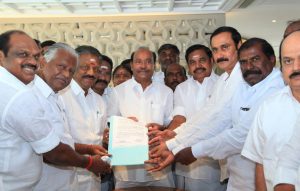 The Bharatiya Janata Party (BJP) on Tuesday closed the deal on its alliance with Tamil Nadu’s ruling All India Anna Dravida Munnetra Kazhagam (AIADMK) for the 2019 Lok Sabha elections.

“BJP will contest on five seats in Lok Sabha elections and we will be contesting together in Tamil Nadu and Puducherry,” Tamil Nadu Deputy Chief Minister O Panneerselvam said.

Speaking on the alliance, Union Minister Piyush Goyal said, “I am extremely delighted that the AIADMK and the BJP have concluded very fruitful discussions and agreed to contest the parliamentary elections both in Tamil Nadu and by-elections to 21 seats together in alliance along with other friendly partners.

The AIADMK will contest 21 Lok Sabha seats, earlier in the day, Pattali Makkal Katchi (PMK) signed an alliance with the ruling AIADMK for the upcoming Lok Sabha Elections. The alliance was sealed at a private hotel in Chennai.

The PMK has pledged support to the ruling party when bye-elections to the 21 seats are held in the state. 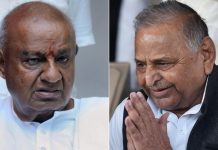