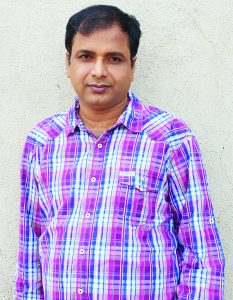 When did the idea of writing ‘Patna Blues’ first occur to you?

I was born in a village called Pandari near Motihari. In the early 1990s, I discovered George Orwell was also born in Motihari. And, this Orwell’s connection with my home district drew me towards literature. The idea to write a novel began to take shape when I was still in college. But, actually, I started writing ‘Patna Blues’ in 1997 just after Arundhati Roy won the Booker Prize. Initially, it was a romantic drama mostly focussing on Arif’s love life. Now, in its present avatar, Patna Blues is a culturally insightful coming-of-age novel with political undertones and is set in the Bihari hinterland.

Debut novels sometimes tend to be semi-autobiographical. Which aspects of your life did you touch upon in Patna Blues?

Patna Blues is a work of fiction and Arif is a fictional character. Unlike Arif, I was never interested in the civil services. But, yes, the moral values of Arif are quite similar to those of mine. And, like Arif, I also lived in police colonies in Patna and Darbhanga. Some of the characters like Arif’s mother, father and grandmother are inspired by my own mother, father and grandmother. Precisely speaking, it is 80 per cent fiction and 20 per cent autobiographical.

Is the book to be seen as a product of pure imagination or an attempt to highlight certain factors influencing the society at large?

Albert Camus said, “Fiction is the lie through which we tell the truth.” So, the characters and situations in Patna Blues are imaginary but they, of course, reflect the realities of our times. In other words, I have tried to tell a good story which has some messages hidden in it. And, if I am able to make even a small positive change in our society through my stories then I’d consider myself lucky.

Joining the civil services is seen as a prestige symbol for many families in Bihar. Do you think a lot of youth give up their passions and succumb to family pressure?

Yes, it is true that civil services is a general aspiration of the middle-class Biharis. And many young men and women ruin their lives while pursuing this goal.

You share your deep interest for Urdu poetry with the central character Arif. How important was the poetic bent to Arif’s story? Or was it just an added element to his character?

The common interest between two major characters, Arif and Sumitra, is Urdu poetry, so it is obvious that they will use poetry in their conversations. Additionally, the use of poetry in my novel is not only for ornamental purposes but they have also been used as a narrative tool. In this novel, I have mostly used my own poems, for both Arif and Sumitra. I believe that this novel couldn’t have been written without using Urdu poetry.

What kind of influence does Orwell have in your works?

As I already told you that Orwell’s connection with my hometown was the main inspiration for me to become a writer. But, despite being an admirer of George Orwell’s writings, my works are not influenced by him.

Which writers/poets have influenced your work as well your perspective in life?

There are some artists who have inspired me throughout my life. Phaniswer Nath Renu, Prem Chand, Saadat Hasan Manto, Habib Jalib, Mirza Ghalib, Rohinton Mistry and Chimamanda Ngozi Adichie are just some of them.

Are there more projects in the pipeline? If so, please tell us about them in brief?