A police officer was killed on late Friday night during an encounter with criminals in Bihar’s Khagaria district.

Ashish Kumar, the Station House Officer (SHO) of Pasraha died on the spot, while another policeman was injured.

According to the sources, Ashish Kumar, 32, was leading his team on Friday night during an encounter with the criminals on the outskirts of Khagaria.

“Upon receiving a specific information about the presence of criminals in the area, the police officials reached the spot, but the criminals started firing indiscriminately after seeing the police arrive.”

During the fierce cross-firing, SHO Aashish Kumar was shot dead. Moreover, officer Durgesh Kumar was severely injured during the exchange.

Sources say, one of the criminals also received bullet injury. 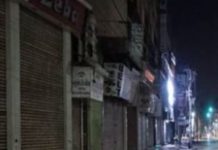