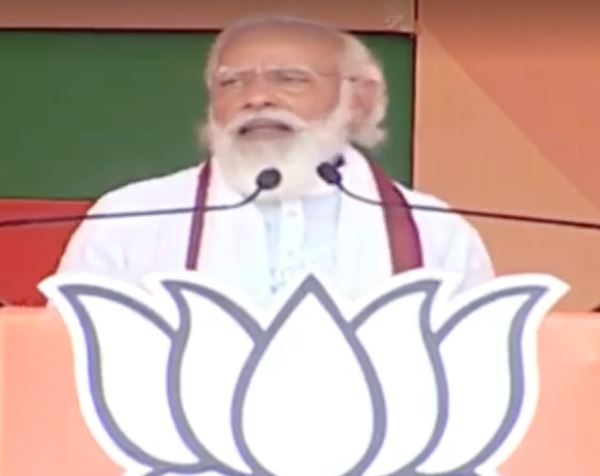 As the first phase of voting is underway in Bihar, Prime Minister Narendra Modi on Wednesday addressed rallies at Darbhanga and Muzaffarpur of Bihar.

He raised the Ram Mandir issue in his rally and also reminded the people about the ‘Prince of Jungle Raj’ during the erstwhile Rashtriya Janata Dal’s 15-year-rule.

“A grand Ram Temple is being built in Ayodhya… those in politics who used to question us on the date (of temple construction) are now forced to applaud… This is the identity of BJP and NDA, we do what we promise,” said Modi in the Darbhanga rally.

While addressing a rally in Muzaffarpur Modi said, “You can imagine what will happen to the funds for COVID-19 if they come to power… What else can people of Bihar expect from the ‘Yuvraj’ of ‘Jungle Raj’, given their past record?”

PM Modi said, “The party, which is infamous for closing down industries of Bihar, is now promising development to the people of the state.”

“Forget about government jobs, if they come to power even private companies will flee from Bihar,” Modi added.

A total of 71 seats of Bihar have gone to the polls today amid tight security and COVID-19 guidelines in place. The next two rounds will be held on November 3 and 7. The results will be announced on November 10.