Chandigarh: Punjab Chief Minister Bhagwant Mann ordered an immediate inquiry into the incident of clashes in Patiala and directed the top brass of police department that none of any culprit responsible for this unfortunate incident should be spared.

Chairing a high level meeting with the senior officers of state administration here at Chief Minister’s Residence this evening to review the law and order situation in Patiala following the violent clashes, the Chief Minister directed the DGP to keep a close tab over the current situation and constantly update him.

Bhagwant Mann unequivocally said that AAP government is firmly committed for maintaining law and order situation in the state and no one would be allowed to disturb the hard earned peace at any cost. He, however, said that due to constant vigil of the state police force, Punjab is still one of the most peaceful states across the country.

Bhagwant Mann categorically said that law and order was prime concern of the state and anybody, whosoever influential may be, would not be allowed to take law into his own hands and dealt with severely as per the law of the land.

Pointing out further, the Chief Minister said that though Punjab being a border state was highly vulnerable as it was being considered a soft target by the inimical forces who want to disturb the peace of the state for their vested interests but due to the strict vigil of the state government the nefarious designs of such forces have been crushed time and again.

Reiterating that the state government had always worked tirelessly for maintaining the communal harmony, peace and brotherhood in the state, Bhagwant Mann exuberating confidence said that the social fabric of the state would not be allowed to disturb and such anti-national forces would be crushed with heavy hand thus upholding the country’s integrity and sovereignty. 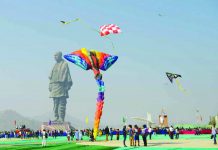