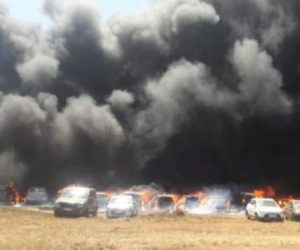 A fire broke out on Saturday afternoon at a car parking area near the venue where Aero India 2019 is being conducted in Bengaluru’s Yelahanka.

According to the reports more than 100 cars were gutted in the incident.

“Fire spread has been brought under control by creating a gap by removing adjacent cars. No injuries or any harm to people have been reported,” Karnataka Director General of Police MN Reddi said.

“The fire spread rapidly due to dry grass and strong winds. Hundreds of vehicles, including two-wheelers and cars were seen parked in the open ground, surrounded by fire, Reddi added.

“In all, 300 cars burnt in the fire incident. Fire fully extinguished now. 10 Fire Force and 5 other fire engines fought the fire under the leadership of Chief Fire Officer, West,” Reddi tweeted.