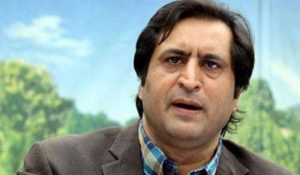 The chairman of the Peoples Conference and the former J&K minister Sajad Lone on Friday said that the New Delhi’s policy of   banning Jama’at-e-Islami and arresting its  leaders and activists will achieve nothing in the state.

Lone instead urged New Delhi to withdraw its patronage to the mainstream parties like National Conference and the PDP which, according to him had only perpetuated the “dynastic rule”.

“Let New Delhi take a pause and think what they achieved by pampering the NC and PDP. Unlike Jamaat, these dynastic parties could not establish even a single educational institution,” Lone told  reporters in Baramulla where he  accompanied his party candidate Raja Ajaz Ali who filed his nomination for the Parliament seat from the constituency.

The PC leader said that, on the contrary, Jamaat,  despite being banned in the past and its leaders put behind bars had several hundred schools where thousands of students received education.

He called on New Delhi to introspect what it had achieved by supporting the parties like the NC and the PDP and rethink its priorities.