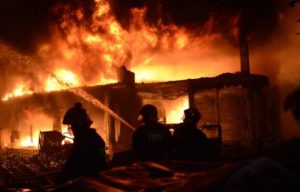 At least 69 people were killed as a fire on Wednesday night ripped through several buildings also used as chemical warehouses in Bangladesh’s capital Dhaka.

The fire broke out around 10.40 pm at a chemical warehouse on the ground floor of a building in Old Dhaka’s Chawkbazar area and the flames then quickly spread through four other buildings nearby, including a community centre, fire officials said.

The death toll could rise further as dozens of people were trapped in the buildings and the firefighters were yet to enter into the main spot where the fire broke out, fire officials added.

Over 50 injured people were being treated at Dhaka’s two major state-run facilities.

Several people were injured after they jumped off the building that housed several families.

According to the sources, the victims included passers-by, some people who were eating food at a restaurant and some members of a wedding party.

Fire officials said, the fire might have originated from a gas cylinder before quickly spreading through the building where highly flammable chemicals were stored.