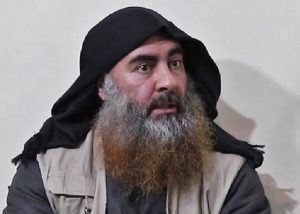 Crazy old man”. This is how IS spokesman described US President Donald Trump after he announced Baghdadi died “like a dog” in a televised address from the White House. In an audio message, the new IS spokesman warned the US that the group’s supporters would avenge Baghdadi’s death.

“Do not rejoice America,” the spokesman warned, “the new chosen one will make you forget the horror you have beholden… and make the achievements of the Baghdadi days taste sweet”. Baghdadi’s killing came just weeks after US President Donald Trump announced the withdrawal of forces from northern Syria. For sure, Islamic State (IS) chief Abu Bakr al-Baghdadi, one of the world’s most-wanted terrorists, is no more now and he blew himself up along with three of his children.

Baghdadi is dead, but the ideology of sectarian hatred he propagated is well and truly alive. Despite the reversals, the jihadist movement remains a potent force as it has managed to establish a cyber caliphate that runs beyond borders. IS teachings are spreading fast online.

Indeed, the US, which had offered a $25-million reward for his capture, has every reason to feel elated over Baghdadi’s death. US President, Donald Trump, in particular, has received a shot in the arm at a time when he is facing an impeachment inquiry in the US House of Representatives. America is indeed gloating in glory.

This is how the drama unfolded. President Donald Trump watched the raid in real time via a video link as troops blasted into the hideout and sent the most-wanted militant running the last steps of his life. Within hours, al-Baghdadi was dead. The stout, bearded militant leader wore a suicide vest and dragged along three children as he fled from the American troops. Trump said that “He reached the end of the tunnel, as our dogs chased him down,” “ignited his vest, killing himself and the three children.” The special forces had come prepared and had brought along samples of al-Baghdadi’s DNA. “It was him,” Trump said.

Baghdadi was earlier captured in 2003, but was released about a year later as his captors thought he was a ‘civilian agitator rather than a military threat’. Little doubt that Iranian information minister Mohammad Javad Azari-Jahromi reminded US about that when he tweeted after the IS head’s death: ‘Not a big deal, you just killed your creature.’ Iran holds the US and its allies responsible for creating the IS, a throwback to America’s unstinted support to the mujahideen during the almost decade-long Soviet-Afghan war.

In the past, Baghdadi has risen like phoenix so when the Islamic State jihadist group confirmed the death of its leader in a statement and named his replacement as Abu Ibrahim al-Hashimi al-Quraishi, it was finally confirmed that Baghdadi was no more. Little is known about Hashimi, whose name was seldom mentioned as a possible successor the multiple times that Baghdadi was reported killed in recent years.

“We mourn you… commander of the faithful,” said Abu Hamza al-Quraishi — presented as the jihadist group’s new spokesman — in an audio statement. Baghdadi, who led IS since 2014 and was the world’s most wanted man, was killed in a US special forces raid in Syria’s northwestern province of Idlib. The seven minute message said “The Islamic State shura council convened immediately after confirming the martyrdom of Sheikh Abu Bakr al-Baghdadi, also announced his replacement. Is it dead end or an opportunity for IS to rebuild and make fresh territorial gains? That is a big question. The IS has become a big Jihadi outfit and Baghdadi’s death may be more than symbolic.