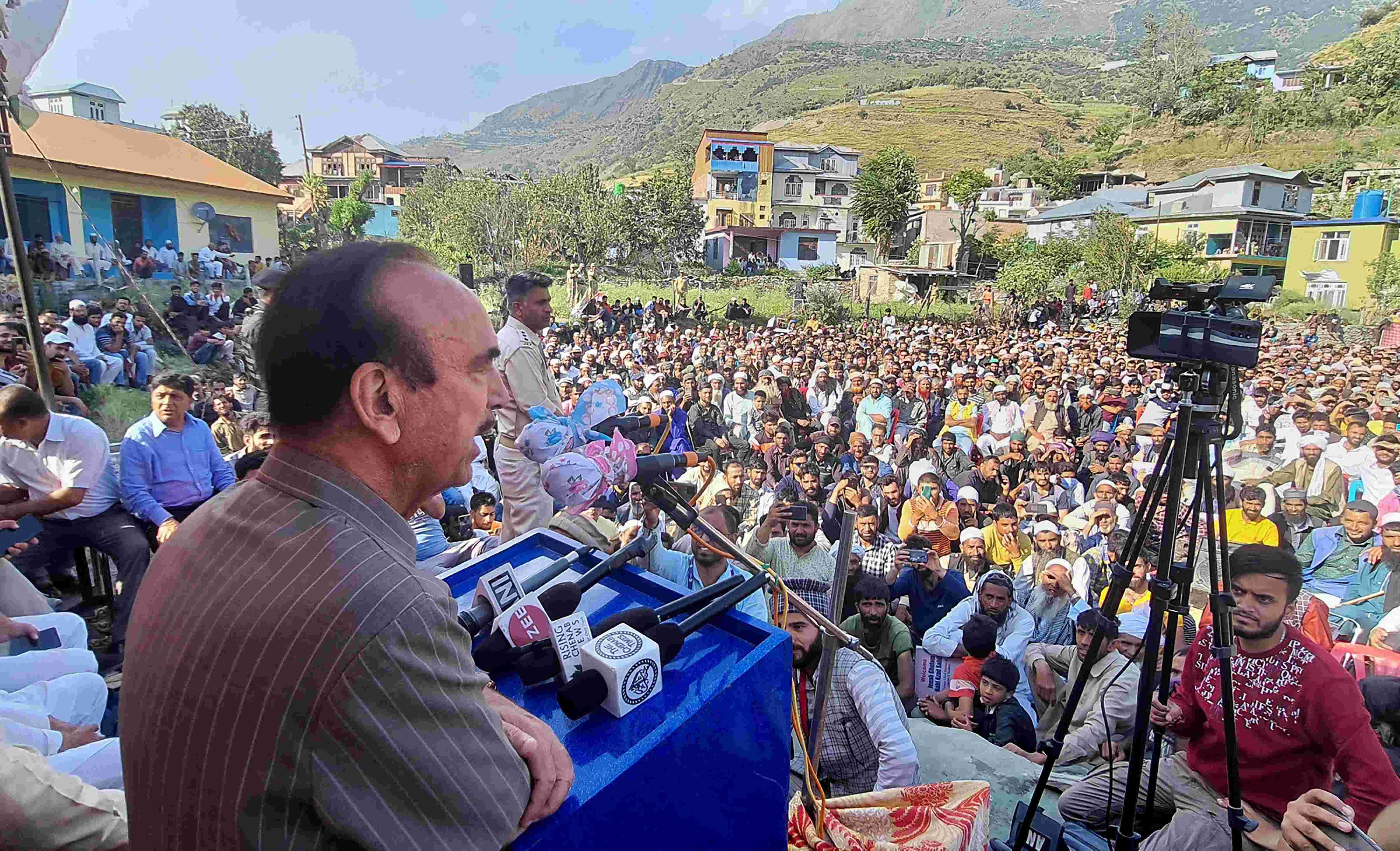 It is too early to assess what impact Azad’s yet-to-be-named party would have on the valley’s electoral politics. However with many prominent Congress leaders jumping the ship and joining him, the grand old party has suffered a crippling blow in the valley, writes Riyaz Wani

When on September 4, Ghulam Nabi Azad held his first rally at Sainik Colony in Jammu after his dramatic resignation from Congress, a large gathering of people testified to his significant support base in the region. In his speech, Azad made all the right noises. He demanded restoration of “full statehood and right to land and employment to native domiciles”, while staying short of seeking a pre-August 5, 2019 position or unification of the erstwhile Jammu and Kashmir.

“We will fight for the restoration of full statehood and the right to land and employment to native domiciles,” Azad said adding his party didn’t want an assembly with a Lieutenant Governor but a Governor. “We also don’t want outsiders to apply in J&K for jobs. If outsiders apply, jobs will vanish for locals.”

Azad also tried to widen his appeal by reaching out to people across the communal divide. “We need to show brotherhood and break the sand walls of hatred created between communities,” Azad said. “Hindus, Muslims and Christians are my heart beats.”

Azad’s party is the second political party to have emerged in Jammu and Kashmir following the abrogation of Article 370 in August 2019.  He said the people of J&K will decide on a name for his party and a flag “by taking into consideration Ganga-Jamani culture”. “Our party name will neither reflect Moulvi’s Urdu nor Pandit’s Sanskrit but Hindustani, a popular language across the country,” he said.

What is more, Azad continued his scathing attack on Gandhis, justifying it as his retaliation for the latter’s criticism of his new political move. 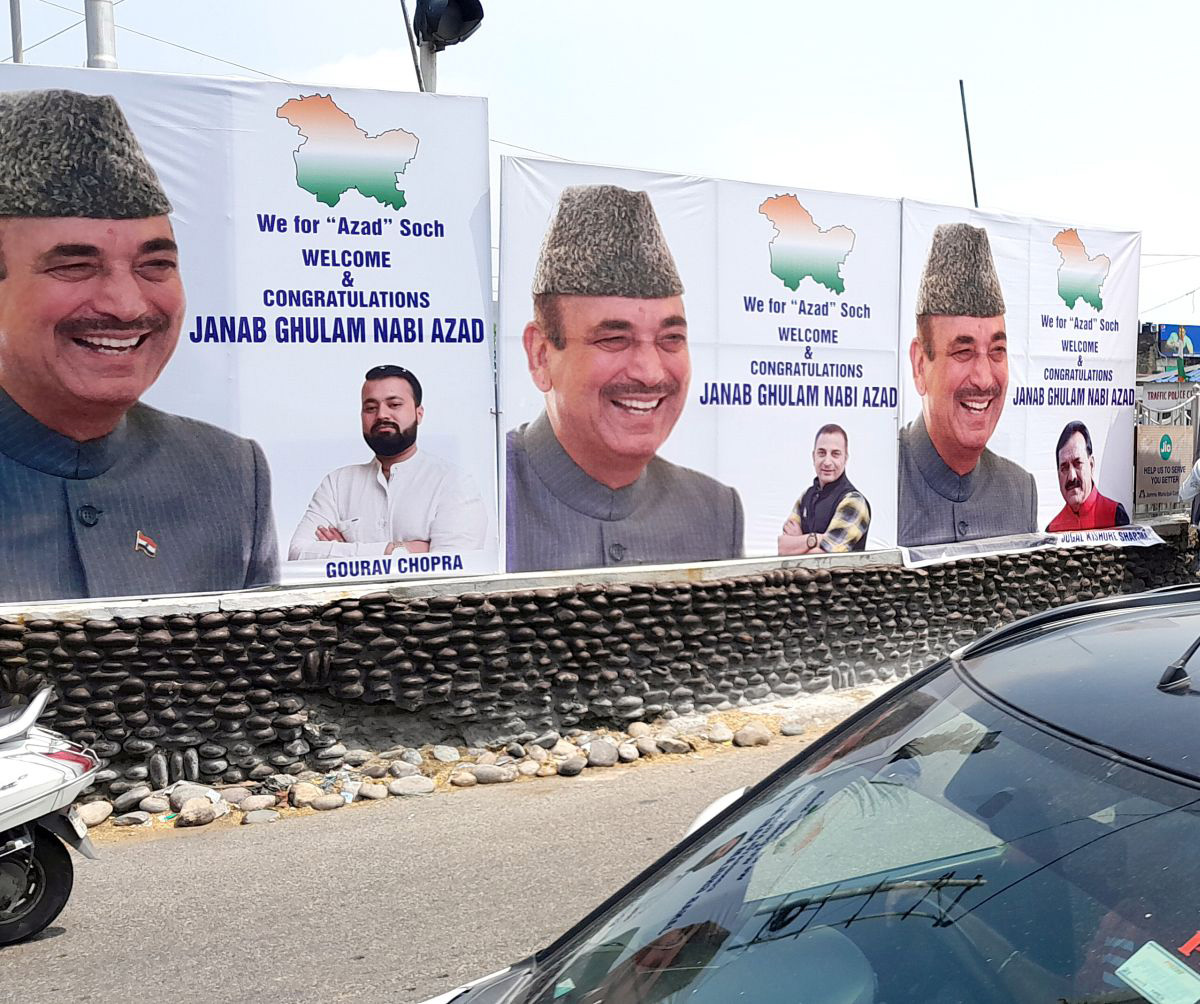 “They tried to defame me by firing missiles at me but when I retaliated, they got grounded with a single shot of 303 rifle. If I had used a ballistic missile, then they would have vanished from politics forever,” he said at a subsequent rally at Bhadarwah.

Azad is planning more rallies across the union territory to drum up support for his new party. And his message is resonating with the people. For one, his exit has by and large depleted the local Congress ranks. It only further reinforces the once vaunted national party’s image of a sinking ship. And in J&K, the party has ceased to be a viable political force with hardly any vote-gathering leader left in the party. Major J&K Congress leaders with a substantial following in their respective constituencies have joined Azad. Among them are leaders like Taj Mohiuddin, Ghulam Mohammad Saroori and Pirzada Mohammad Sayeed and the like. This is expected to enable Azad make deep inroads into the constituencies of the other parties, particularly the Muslim vote bank which may or may not go to the advantage of the BJP.

“He will only end up splitting the Muslim vote in Jammu and give a clean sweep to the BJP,” said a political opponent who didn’t want to identify himself. “For himself, Azad might not be able to get any seats or may get only a few. Overall, the outcome will be further strengthening of the BJP in J&K.”

But there is a counter opinion too which sees Azad as a viable challenger to both the BJP and the Kashmir-based parties.  Some even see him as a future chief minister, a turn of events probably enabled by the BJP. Should he get more seats, the former Congress leader is also seen as a favourite to form the government with the support of Kashmir-based parties. But for now, both analyses are in the realm of speculation.

Going forward, these options could throw up big political dilemmas for Azad. The dominant perception in J&K is that he is a proxy for the BJP. However, Azad and his associates have tried to dispel such an impression by reiterating their commitment to secular ideals. He has also nullified the earlier rumours of joining the saffron party by deciding to float a new party. His would be the second party to have come up in J&K following the revocation of Article 370 in August 2019. The first one is the Apni Party led by the businessman-turned-politician Altaf Bukhari which is deemed close to the BJP and sees the withdrawal of Article 370 as a fait accompli. Azad also doesn’t insist on the reversal of the move but wants land and job rights for the “native domiciles” only.

The advent of  Azad’s party further complicates the political scene in the Valley. What Azad is up to remains, thus, a mystery.  There is, as yet, no telling if he has any understanding with the BJP beyond his perceived good rapport with Prime Minister Narendra Modi. Or whether he plans to go solo in J&K elections or form an alliance with the other parties, more importantly with the PAGD. As of now, there are no straws in the wind that could point to his likely course of action. But one thing is sure: should Azad decide to go it alone, he could well end up doing what Assadudin Owaisi did in the UP: split Muslim votes to give the BJP a clean sweep in the Jammu and potentially in a few seats in the Kashmir Valley too.  Or he could even turn out to be another Mufti Mohammad Sayeed  who will emerge as yet another political force in J&K, this time potentially from Jammu division.

Azad has his strengths though: While he may have lost the last parliamentary election to the current union minister Jitendra Singh, he enjoys a good deal of goodwill in parts of Jammu and Kashmir if not an easily identifiable support base. This is because he has always deftly straddled the political divide between Jammu and Kashmir. In Jammu, his pro-India credentials remain impeccable – an attribute now even certified by PM Modi.

And, in the Valley, his advantage is that no one expects him to be adversarial towards New Delhi, a characteristic that is expected of every Kashmir based leader. In fact, a Kashmiri leader’s popularity is directly proportional to how aggressively he challenges New Delhi’s hegemonistic policies – real and perceived – towards Kashmir. Azad is not burdened by such expectations and therein lies the secret of his modest acceptability in the Valley. Also, for all his ideological divergence from the drift of the political discourse in the Valley, Azad’s politics has invariably had a benign orientation, which trumps a hostile public response.

Azad has also been smart enough to locate his politics at the only conceivable political meeting ground between the Muslim majority Valley and the Hindu majority Jammu: He doesn’t demand restoration of Article 370 which faces opposition in Jammu’s Hindu-dominated areas but he wants protection for jobs and lands, something that resonates with both the regions.

This is here that Azad threatens to emerge as a dark horse. And to his advantage, if things don’t go well enough for the BJP, the saffron party would be content with a potential cameo role by Azad for one important reason: he could help splinter further Muslim vote and potentially stymie a Valley based party’s or a coalition’s bid to get a reasonable number of seats let alone a majority, the BJP’s mortal fear.