The Supreme Court on September 27 will decide if a Constitution Bench should revisit the issue of whether namaz can be offered anywhere, or whether a mosque is an essential part of Islam and is needed for Namaz.

It will deliver a key verdict on the matter that could impact whether a temple will be built at Ayodhya or not.

A three-judge SC Bench of Chief Justice Dipak Misra and Justices Ashok Bhushan and S Abdul Nazeer, which is hearing appeals against the Allahabad High Court verdict of 2010, which had ordered a three-way partition of the disputed land between Muslims, Hindus and Nirmohi Akhara, will decide the matter.

The matter became critical during the hearing on Ayodhya case, which reached the apex court after the Allahabad High Court’s 2010 judgment was challenged.

Rajeev Dhavan, appearing for a Muslim petitioner, argued that the appeal from 2010 Allahabad High Court judgment dividing the disputed site into three parts could be heard only after the main issue is decided as a preliminary issue.

In 1994, the apex court said that namaz could be offered anywhere and that a mosque was not necessary for this. 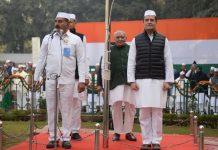