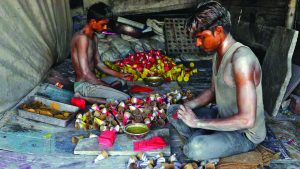 Why people were “running after” firecracker industries when it seems that automobiles were “bigger” contributor to pollution? This is the question that the Supreme Court has asked the Centre, asking it to provide any comparative study on pollution caused by both.

While expressing serious concern over loss of jobs of people involved in manufacture and sale of firecrackers, a bench of Justices S A Bobde and S A Nazeer said, “We do not wish to generate unemployment.”

The top court said, “You must tell us some way of preventing unemployment also. We cannot have people unemployed and hungry. There are areas where firecrackers can be used. We cannot give them (those who have lost jobs) money. We cannot support their families. Unemployment is there,” the bench said. It also raised a question as to how manufacture of firecrackers could be stopped if the trade is legal and people have licence to carry out the business.

“Nobody has tested this in relation to Article 19 (which says all citizens shall have the right to practise any profession, or to carry on any occupation, trade or business). If the trade is legal and you have the licence for this, then how can you stop this? How can you leave people unemployed?” the bench observed. The court was hearing a plea which has sought a complete ban on use of firecrackers across the country on the ground that it gives rise to pollution.

The apex court had last year said people in the country can burst firecrackers only from 8 pm to 10 pm on Diwali and other festivals, and had allowed the manufacture and sale of only “green crackers” which have low emission of light, sound and harmful chemicals. During the hearing on Tuesday, the ASG told the bench that the Petroleum and Explosives Safety Organisation (PESO) and other expert agencies were experimenting and they have come up with composition of “green crackers”.

Regarding the use of barium nitrate, which was earlier banned by the apex court, Nadkarni said, “Barium was banned in firecrackers by the Ministry of Environment, Forest and Climate Change and the Supreme Court also banned it. It was used only for testing purpose to check pollution from crackers.”

He referred to the minutes of meeting of the Council of Scientific and Industrial Research (CSIR) and the National Environmental Engineering Research Institute (NEERI) and said it has been envisaged that product approval for the improved formulation shall be given by PESO by March 21 this year. “A meeting in this regard is scheduled tomorrow. Once the formulation comes and if there is any objection, then it will be dealt with,” he said.

Advocate Gopal Shankara- narayanan, appearing for the petitioner who has raised the issue of air and noise pollution from firecrackers, said around 2.5 per cent of annual pollution in Delhi-National Capital Region is due to use of crackers for a few days during the festive season.

When the bench referred to issue of job loss of people involved in manufacture and sale of crackers, the ASG said, “That is why the concept of green crackers came.” Shankaranarayanan also said there is no direction from the apex court to stop manufacturing firecrackers. The bench was also told the issue of pollution caused due to crop burning is also pending in the court along with a separate issue of vehicular pollution and hybrid vehicle.

The bench, which posted the matter for further hearing on April 3, told the ASG that he would have to make submissions in the case region-wise as there are areas where crackers can be used. The counsel appearing for firecrackers manufacturers said PESO and other expert bodies have already come up with composition of green crackers.

The PESO last week told the apex court that it has finalised “improved formulations” for green firecrackers and product approvals will be given to manufacturers by March 21.

The apex court last year also banned the manufacture, sale and use of joined firecrackers (series crackers or ‘laris’) saying they cause “huge air, noise and solid waste problems”. It had said noise and smoke emission limits of the crackers will have to be approved by PESO, a body under the Ministry of Commerce and Industry. To curb pollution in Delhi-NCR, the court had directed the Centre, Delhi government and the state governments of NCR to permit community fire-cracking (for Diwali and other festivals), wherever it could be done. 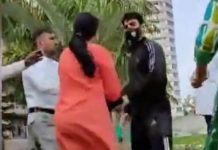