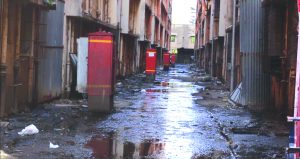 The landmark decision of National Green Tribunal, ordering the shutdown of Aegis Chemical Solutions and Sea Lord Containers has come as a great relief to the Mahul residents.

The hapless people of the twin localities — Mahul and Ambapada, right in the heart of cosmopolitan Mumbai had literally put everything at stake in order to win the court battle against the poison spewing Aegis Chemical Solutions and Sea Lord Containers. Their ten-year-long and painful struggle ultimately bore fruit. The NGT ordered the shutdown of the two companies sometime back this year. The companies’ shutdown would bring the noxious emissions to end. Ironically, the order is received by them but not implemented yet.

The residents of the two localities have coughed-up almost `4.5 crore during this 10 year-long legal struggle. Undergoing extreme financial hardships, they had to mortgage their houses, hotels and businesses in order to collect the money to fight the court battle.

About 36 types of noxious chemicals are filled in these tanks every day. The residents suffer breathing and other health-related problems due to the air pollution caused by these chemicals. Besides being spurious to health, these gasses smelt like rotten eggs. Every day, the company empties around 700 tankers into these storage tanks. Prior to their fillings, the tanks are cleaned before the chemical is stored every time. The Nitrogen is used to clean these storage tanks; this Nitrogen causes many respiratory disorders to the residents.

Aegis Chemical Solutions Company is located at the rear side of the residential colony. The poisonous impact of air pollution is so intense that the women in this locality have been getting menstrual cycle twice a month. Many among the 20 thousand populations in the two localities suffer from multiple skin disorders, eye-inflammation, kidney disease, cardiovascular disorder, paralysis, abortion, etc. and these are constantly on the rise.

“We had complained to almost more than 26 different authorities but no one addressed our problems. Many residents have been diagnosed with cancer since the establishment of the company. Around 50 deaths were reported due to the air pollution in 2017,” Dayaram Mahulkar, Petitioner of Mahul-Ambapada Committee said. Along with him, the petition was filed against the company by Charudutt Koli, Mohan Mhatre and Dattaram Koli.

Fish population dwindled due to pollution

The sea water isn’t spared either. After cleaning the storage tank, the Aegis Chemical Solutions Company releases polluted water into the sea. The residents of Mahul-Ambapada have complained about the dwindling population of fishes along the coasts in the vicinity and put the onus for this on the company. Recently, the raid conducted by the State PCB under Environment Minister Ramdas Kadam’s stewardship found that the untreated effluents were directly released into the sea. The raid also noticed that there wasn’t any effluent treatment plant which processes the water used in the industrial sector prior to releasing it.

The KEM hospital has conducted ‘Respiratory mobility survey’ in Mahul and Ambapada areas and found that many people suffer from chest pain and breathing trouble.

♦ 86.6 percent of people complained of eye-inflammation

♦ 84.5 percent of people complained of pain in the chest

♦ 66.5 percent of people complained about Phlegm

♦ 51.4 percent people complained of pain in the chest