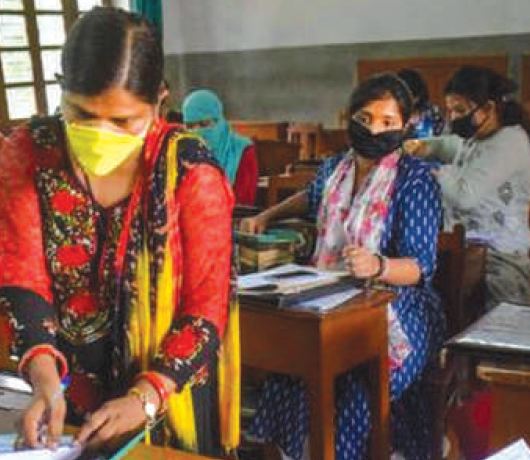 The eclipse of infamous “Vyapam” scam of Madhya Pradesh has been haunting the recruitment process of assistant teachers for the Junior Basic Schools of primary education department in the Uttar Pradesh too. The process of 69000 assistant teachers through recruitment examination-2019 has been marred with serious allegations of corruption vitiating the sanctity of examination, objective evaluation of answer sheets and fair process of selection. At every stage of the selection process the sanctity of impartial and unbiased selection remained in clouds of doubts pointing finger with allegations of high level connivance and conspiracy behind it motivated with extraneous considerations.
The Uttar Pradesh police on 9th June, handed over investigation into the alleged irregularities in the recruitment of 69,000 government teachers to a special task force as the issue took a political turn with Congress leader Priyanka Gandhi Vadra attacked the chief minister Yogi Adityanath. Expressing her solidarity with the candidates, she alleged that exam paper leaks and irregularities in marking had become the norm in the state. She said CM Yogi Adityanath should take responsibility for the candidates.
The recruitment examination-2019 has been embroiled in quagmire of litigation since its very inception, and fresh controversies have erupted at each stage of the process which have engaged the attention of the High Court as well as the Hon’ble Supreme Court. The highly powerful sharks of the scams had conveniently survived the investigations of red-handed crackdown at a prominent examination centre of state capital and recovered sufficient evidences of the paper leak along with answer keys of “Set A paper” with complete trail of money from the many candidates appeared in the examination.
The Special Tasks Force (STF) of UP Police during recruitment examinations 2019 of assistant teachers in Lucknow on 6th January 2019 arrested a principal of National Inter College Umashankar Singh along with 13 other accused involved in the state wide network exposed during raids and trail of Whatsapp massages and cash money and 13 cheques were recovered from kingpin of scam Arun Kumar Singh.
Hazratganj police with its Inspector Radha Raman Singh also assisted STF operations and an FIR under Sections 34, 120-B, 409 and 420 IPC and Section 66 of Information Technology Act bearing crime No 0019 of 2019 was registered against these arrested accused by the Inspector STF Brijendra Sharma. But the case seems to be hashed up due to high level intervention as no further progress ever come to light in answer keys leak case to the prospective candidates for which money transactions took place helping them pass the exam through illegal means.

Social Activist and pro bono lawyer Nutan Thakur demanded immediate cancellation of Assistant Teacher examination-2019 and institute impartial investigation to CBI. “The STF enquiry would be meaningless in these circumstances,” she contended.

“Despite these clear information, the STF did not proceed any further in the matter, while the State Government did not cancel the exam despite knowledge of these facts, which bring forth the ill intent of STF and the State Government,” Nutan contended.
Having full knowledge of such irregularities the Basic Education department continued with the recruitment procedure for induction of 69000 assistant teachers for Junior Basic Schools throughout the state. The controversy erupted surfacing the serious charges of wrong and inaccurate evaluation and notification of faulty answer keys despite raising objections. It resulted in series of litigations preferred by leftover candidates who were just on the brink of qualifying cut-off marks.
The grievance agitated by the more than 300 candidates the against the stand of State of UP and examination authority through 31 writ petitions mainly challenging the “final answer key” issued by the Authority, after inviting objections from the candidates. The petitioners have vehemently submitted and demonstrated that certain questions are on the face of it erroneous, certain answers are also incorrect and some questions are extremely ambiguous and a few of them are debatable and argumentative and therefore have multiple correct answers.
It has been submitted that the benefit of the marks of such of these questions are liable to be awarded to the petitioners, and if so awarded, they would cross the threshold qualifying marks and gain entry to the next round of the selection process.

Considering the above propositions, the single judge of the High Court Justice Alok Mathur while staying the notification dated 08/05/2020 whereby the final answer key had been notified and all proceedings pursuant to this notification and referred all the objections raised by the candidates pursuant to publication of the provisional answer key to a panel of experts to be formed by Secretary of University Grant Commission. The examining authority after receiving the report of the expert/subject specialists are directed to file the same before this Court on affidavit. Recording the findings justifying the interim stay on the selection process the Justice Mathur held:

“In the present case the Court has examined certain questions as stated above and is of the considered opinion that there has been a material error in evaluation of the question paper due to which a large number of candidates are liable to suffer for no fault of theirs. The State in the counter affidavit while agreeing that there may be certain questions which may be argumentative which may have more than one correct answer, but maintained that this Court need not interfere, inasmuch as the presumption should go in favour of the examining authority.”
“Once it is clear that there could be more than one correct answers in an objective type question where several options have been provided by the examining authority, the candidate is required to select only one correct answer, then it is incumbent, necessary and mandatory that infact there should only be one correct answer which could be selected by the candidate, otherwise, he would be liable for additional marks for the negligence of the examining authority and he need not be made to suffer. In an objective type of question paper there is no scope for any deduction or inference nor is there any provision for giving reasons for the answer therefore argumentative questions clearly have to be avoided and have no place in an objective question paper.”
However, on a special appeal of the Examination Regulatory Authority a division bench comprising Justices Pankaj Kumar Jaiswal and Dinesh Kumar Singh on June 12, 2020 stayed the operation and effect of single judge order dated 3.6.2020 passed in the bunch of petitions led by Rishabh Mishra vs State of UP pending notice to concerned parties and granted liberty to state government to continue with the recruitment process in accordance with apex court orders came on 21st May and  9th June 2020 in order to protect the cause of 37339 Shiksha Mitra directing the UP government that services of Shiksha Mitra shall not be disturbed and  37339 posts for them shall be kept in reserve. Interestingly, the bench reserved its orders on 8th June 2020 on the admission as well as on the question of grant of interim order allowing 24 hours’ time to file written submissions.
“Nowadays, if you want to become a teacher in U.P., you have to be well versed in the craft of litigation with background of all the judgments of the High Court in the field of Education before starting on anything else,” said petitioner Rishabh Mishra who is undergoing tremendous mental stress after his sole bread earner father died from prolonged ailment of cancer. He was a school teacher. “Securing job is my immediate need as I am the eldest to look after my family,” he added. Rishabh just fallen short of three marks due to faulty answer key but his fate is in doldrums. “I spent four year on training and self-study but all my labour seems to have become futile,” he expressed scornfully.
“Who was the originator of the cult named Nath Panth?” When Rahul Yadav of Hathras answered this question in January 2019 in an examination for recruitment of 69,000 assistant teachers in Uttar Pradesh, he confidently ticked ‘Gorakhnath’ as the answer.
The counsel of the petitioners have submitted that the various authors have given different answers. In some authoritative text ‘Matsyendranath’ has been shown to be the originator of ‘Nath Cult’ while in some ‘Gorakhnath’ has been shown to be the originator. Citing the extract of a book written by Dr Baccha Singh wherein the chapter relating to ‘Nath Panth’ it has been indicated that ‘Gorakhnath’ was the “Pravartak” of the ‘Nath cult’. To further canvass the points they also enclosed an extract of a book written by one Manoj Kumar Mishra where both ‘Matsyendranath’ and ‘Gorakhnath’ have been indicated to be “Pravartak” of the ‘Nath Panth’

He raised an objection as per procedure but the amended answer key did not solve his grievances. The result was declared. Rahul scored 89 out of 150 marks just one mark less (cut off for OBC candidates was 90) to qualify for the next stage of recruitment.

On the specific question on Nath Panth, the petitioners’ argued that when the same was asked in the Trained Graduate Teacher exam, Gorakhnath was listed as the right option while Matsyandranath was not even among the four choices.
Another candidate from Moradabad scored 87 marks, falling three short. One of the contentious questions he faced was on the first President of the Constituent Assembly of India. Like many candidates, he answered Dr. Rajendra Prasad but the answer key said it was Dr. Sachidananda Sinha. In court, one of the petitioners cited authoritative text and the official Lok Sabha website in favour of Dr. Prasad. Also, when the same question was asked in the 2011 PCS Judicial exam, Sachidananda Sinha was not even an option, they argued.
“I believe it was a deliberate attempt to fail me,” alleged Rahul. “Since 2013, I have been waiting for this appointment but for no fault of ours, we have been running from court to court.” with this fate of many candidates hangs in protected litigations and with growing age many of them may cross the age limit to qualify the examination eligibility criterion.

Adult couple may live together even outside wedlock: SC