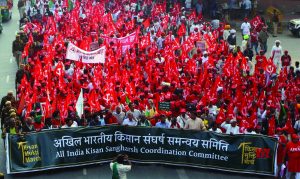 The results of assembly polls in states of Chattisgarh, Madhya Pradesh and Rajasthan have brought the issues of the farmers at the forefront and all political parties have now discerned (if not openly accepted) that agricultural distress has reached a climax and needs to be reversed. Though relatively less educated, farmers of our country have now started understanding that non-implementation of the promises and announcements by the policymakers has taken a toll on their lives and they want more than rhetoric. Farming is livelihood of more than half of India’s population. This probably is the only vocation, in which same skill and factor of production (land) is passed on from one generation to another for many years to eke out a modest livelihood. Over the past few years, the divisions of landholdings, burgeoning cost of production and lack of education has turned farming into a Hobson’s choice for many cultivators. The NSSO study (2003) reported that 40 per cent of Indian farmers expressed their desire to leave farming, it being a non-profitable occupation.

Framers with small landholdings have no other option but to pursue farming, though it is completely unviable for them in the post-liberalisation era.

The agrarian distress had been chasing the farmers for long but of late, more organised protests by the farmers in different states and at the national capital has found voice for their anger and frustration. The major consequence of farm distress is the deteriorating lives of marginal and small farmers, who find it increasingly hard to sustain with small landholdings and are getting pushed out of agriculture. The farmers, of late have united at national level and their recent protest on November 30 in New Delhi was the fourth such congregation in last one and a half year. There have been reports that Narendra Modi led government is contemplating to write-off billions of dollars of loans to please the farmers ahead of General Elections of 2019. The announcements probably are not a guarantee to ballots as the revision of Minimum Support Prices of Crops just before the assembly elections failed to fetch the desired results for Modi Government. The rural voter is more aware now. The manifesto of 2014 election had painted a very rosy picture for the farmers but the farmers across India interviewed for this article told that their plight has gone from bad to worse. The fanfare created around crop insurance scheme, soil health card, e-NAM, hike in minimum support price, doubling of income did not get any results rather opened a new window for misuse of funds and corruption for officials.

Why is farming sector suffering and why the farmers have become more vocal in the recent past? This can be evaluated by discussing some major issues concerning the farmers.

It has been observed that in the past few years, the real income of the farmers has either remained stagnant or decreased despite rapid increase in productivity (82 million tonnes in 1960-61 to 275.68 million tonnes in 2016-17). In our country, about 80 per cent of the farmers are marginal and small farmers, who are unable to save and invest due to low levels of income. In such a situation, the announcement of doubling of income stimulates hope in the lives of a large number of people who could be prospective beneficiaries of such vision of the government. An investigation into the time required for doubling the farmers’ income by 2022 as envisaged by the Modi Government as analysed by NABARD explains that at national level it will take 13.56 years to double the farmers’ real income at CAGR of 6.68 per cent. These are the Government’s own estimates and shows that poor population is given projections that are difficult to attain.

The insurance of crop is imperative for managing yield risk particularly in rainfed areas, more so for marginal and small farmers who face greater degree of difference in yield. The misuse of government funds in the garb of Pradhan Mantri Fasal Bima Yojna (PMFBY) in some states has been reported and may be only a tip of the iceberg. The farmers have been lamenting that the premium of insurance is deduced from their loan account in the banks without their knowledge but for the compensation such enthusiasm of banks is missing. The private insurance companies fleece them and many of them are not even aware of crop insurance in their name and do not seek the claim if crop is damaged. PMFBY ostensibly provides a comprehensive cover at a premium of 2 per cent of the insured value for the kharif crop and 1.5 per cent for rabi crop. The response has been lacklustre as the government itself claims that the coverage of this scheme will be increased from 40 per cent in 2016-17 to 50 per cent in 2018-19. Different parameters used for the insurance for the industries and commercial establishments vis-à-vis agriculture. In crop insurance, the loss of a farmer is calculated on the basis of loss in a block or a village. The individual farm is not eligible for the crop loss suffered. This evidently shows the flaw intentionally designed to favour the corporate. It has been widely covered in media that in the crop year 2016-17 (a year of normal monsoon), a sum of 22,437 was paid to insurance companies as premium, whereas the farmers were issued the crop loss claims worth 8,088 crore. This has disgruntled the farmers in all parts of the country.

The emergence of cow protection squads during the Modi regime has badly hit the farmers’ income especially in the northern states where the income from cow breeding helps the farmers to compensate for the low remuneration from farming. The proliferation of self-styled cow protection squads has not only undermined the income generation from breeding but also resulted in growing number of stray cattle. The farmers have to spend for the up-keeping of the abundant animals with their limited means and the space. The financial and social implications of such decisions have not been revisited despite repeated demands from the farmers. According to a senior farmer leader, killing an expensive high milk-yielding cow is something unthinkable as it does not make a business sense. Even then, Gau Raksha Boards have been constituted and it has been mandatory to procure no objection certificate (NOC) from district authorities and Cow Protection Board, that has helped smugglers at cost of the farmers.

Although government announces the Minimum Support Prices of 23 crops every year, the actual procurement is done only for wheat, paddy and cotton. Sugarcane is procured under SAP (State Advised Price). This explicitly excludes a huge number of farmers who grow crops other than these four crops. The farmers are advised by the state agriculture departments in the respective states to grow horticulture crops, oilseeds and pulses but the state marketing boards do not make sufficient effort to organise for buyers of the crops.  Lack of cold chains and processing facilities at affordable cost dissuade the farmers from diversifying. The different department of the state though headed by the same minister (Agriculture) work in complete isolation and farmers suffer.

The noted agriculture scientist, Professor M S Swaminathan, around whose report, the farmers protests are revolving also believes that the demand for loan waiver emerged from non-remunerative prices of the crops. An integrated approach towards crop production, pricing, marketing and procurement is the need of the hour.

According to BS Dhillon, Vice Chancellor of Punjab Agriculture University, Ludhiana, the agriculture sector in India is marred by low investment in farm infrastructure. The allocation of resources for research in agriculture is much higher in countries like U.S.A. and China. Another disadvantage for the agriculture sector in India is small size of farms. With the mechanisation of agriculture, we have been able to modernise farming to some extent but have not been able to absorb the surplus labour that resulted out of this mechanisation. This has resulted in disguised unemployment, low average income and economic stress. According to NSSO Report of 2012-13, the average monthly income of a farm household in India is 3,350. Is it a sustainable level of income? The disparity in the society between the farming and non-farming communities has been increasing sharply, giving rise to social unrest, manifested in protests and agitations. Loan waivers and MSP are the short-run remedies. We need to contemplate for long run sustainability. We need to understand that natural resources are limited so re-rationalisation of these scarce resources is to be mulled. Blindly aping models of other counties will not solve our problems and we need to design our own models fitting into our socio-economic set-up and natural endowments.

The Modi government spent a lot of time and money on publicising digitalisation of Indian economy. It was devised to remove intermediaries and bring transparency in payments. Farmers, mostly uneducated, have not been availed any benefit of digitalisation. The small farmers sell their crop either through commission agents (in state where procurement of crops is done) or through large farmers. Hence, in the official records of market committees, the commission agents or the large farmer is a seller and the money is transferred in his account. Poor farmer does not even come to know when the money is transferred electronically in the account of the intermediary and gets delayed payments.

The disparity of tax structure even after the roll out of GST regime has undermined the farming sector. Sushil Mittal, President of Haryana Ginning Mills’ Association told that the market fee and cess in the agriculture markets of different states are different. Modi government has a callous disregard for the farmers. A textile hub was promised by the BJP Government in Haryana as Haryana produces 25 lakh bales of cotton annual and its consumption is only 3 lakh bales per annum. It would have created job opportunities as well. It has not been implemented and no one listens to our demands.

He said e-NAM has also been a failure because the infrastructure needed to check the moisture in grain and other parameters for different crop have not been provided. A trader located in down south may need cotton from Haryana but quality certification facilities are not available in the markets.

The farmers have also started understanding now that along with debt waiver the implementation of the recommendations of the National Commission on farmers can only solve their economic distress. The roll out of new schemes with fancy names and publicity cannot cut the ice. The results of assembly polls are surely a warning bell for the political parties. As the saying goes ‘United we stand’ fits well for farming community at this juncture. 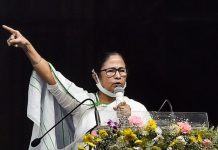 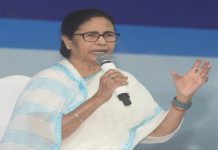