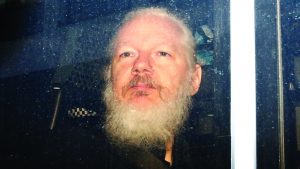 Julian Assange is not my hero. The curious case of Chelsea Manning is different. Manning helped Assange to leak the American secret data cable that now enables us to view a shocking video where innocent children were mercilessly killed by American airmen in Iraq in 2007 invasion.

Let me talk about the video first. After knowing about that ghastly affair you will be in a better position to judge the whole thing — in a better perspective. To judge or understand anything, context plays a very important role. The video rocked and shocked the whole world when we had first seen it in 2010 after WikiLeaks published it on their website.

The recording was filmed in July 2007, in Iraq. At that time the US and UK invasion of Iraq gathered huge momentum. It was recorded by two US AH-64 Apache helicopters; they were attacking a building in Baghdad supposed to be occupied by the terrorists.

However, instead of targeting that building, they chose a group of people standing outside. In that group there were several children, two journalists; moreover, they were not armed, they were not shooting towards the US helicopter. However, that group of unarmed, civilian people was targeted and sprayed with bullets remorselessly.

When the Americans were given permission to shoot the innocent gathering, they rejoiced and burst with joy: “Light ‘em all up”, they cried in ecstasy. Ghastly laughter and the indiscriminate shooting followed; it killed several children including Reuters’ staff Namir Noor-Eldeen and Saeed Chmagh.

When people were screaming and running helter-skelter down the steps to escape the flames and bullets what was the reaction of the American soldiers? “Oh, yeah, look at those dead bastards,” says one airman. What about the dead children who were burnt like flowers? Someone pointed out from the helicopter and shouted, “Well it’s their fault for bringing their kids into a battle.”

That recording was first filmed in July 2007. A secret government cable. And that was our first introduction to WikiLeaks. The army intelligence analyst, transgender, Chelsea Manning leaked the footage to WikiLeaks and its founder Julian Assange. After the leak the US government, the Pentagon justified the killing.

After that, a series of self-contradictory events followed. We have seen many twists and turns in the story. Manning was arrested in the US and prosecuted. Manning served seven years for leaking the video while Assange spent seven years in the Ecuadorian embassy in London.

At the same time, the ghastly video raised many questions: whether US and UK actions should be trialed under the allegations of a war crime or not was fiercely debated and came up with no solution at the end.

Julian Assange faced a rape charge in Sweden by two Swedish women separately, but instead facing the charges there, he flew to London and sought political asylum in the Ecuadorian embassy and later he declined to travel to Sweden. Besides, Manning was recently seen in a pro-Trump event. Although, Manning later refuted the charge of supporting Trump or the alt-right group. She later shared a photo of herself on Twitter informing “crashed the fascist/white supremacist hate brigade party. All selfies were denied.”

Truly a self-contradictory behavior; we have seen from two great whistleblowers of our time. And I cannot support any one of them. Assange should have enough guts to face the rape charges brought against him in Sweden.

Instead, he escaped to London and holed up in the Ecuadorian embassy. Why he did that? He said he was fearful about the extradition treaty between Sweden and America. He could have been extradited to the US. However, it was just a fear without any substance.

Now Assange was detained by the UK government at the request of the US, who have charged Assange with conspiring with Manning. And the same fate seems now more fearful because the UK and the US are closely tied up through many pacts that we don’t know.

From here the whole story takes a different turn. What WikiLeaks had published is nothing but a Collateral Murder footage, a secret government data. Assange was also responsible for bringing forward the inner story relating to the Guantanamo Bay detention camp.

Much of the material was published by newspapers across the world. In that sense, Assange has been one of our era’s most important whistleblowers. And for leaking government data he should not have been arrested. Then the same fate awaits all the journalists.

At the same time, we should not forget Assange’ role in publishing secret and highly sensitive US Embassy Cables about the dictatorship of Belarus. These data could have been used to act on brave opposition activists. It is evident from Assange’ activities that he did not know where to stop. He was reckless and probably narcissus in that sense and he always wanted to stay on the news by publishing whatever he had his hands on.

In the truest sense, Assange had never been a criminal hacker who compromised other systems without permission and stole data. What Assange had done, any journalist without prior knowledge of computers would have done. Assange got the secret cables through Manning and he published it. Many newspapers published the same materials. And that is the real danger. A dangerous trend is gaining ground in Trump’s era.

We did not come to know about the trend, until last November; federal prosecutors inadvertently revealed that a sealed indictment had been filed against WikiLeaks founder Julian Assange. Many people, journalists, who despise Assange took the news seriously and they were deeply concerned.

People, who really care about civil liberties, are concerned and alarmed for one single reason: if Assange can be prosecuted for publishing leaked classified documents, every journalist, and media outlet are at risk of prosecution for doing the same thing. Lawyer Bradley P. Moss raised the same question in The Atlantic.

I again reiterate, Assange must be made to answer the allegations of sexual assault against him but it will be highly unfair if he is prosecuted for publishing secret government data. It will simply shake the fourth pillar of democracy.

Sanjib Sinha is an author and tech writer. He has written several books for Apress on Ethical Hacking and security programming.