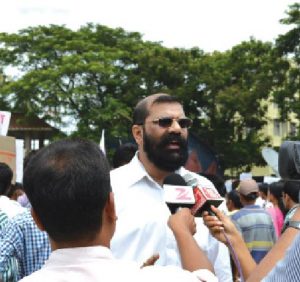 The All Assam Students Union (AASU) has just held a tripartite talk with the Home Ministry and the Assam government on Tuesday to review the implementation of the Assam Accord of 1985. What is the outcome of the meeting?

In the meeting it was decided that the Indo-Bangladesh border in the Assam sector would be jointly patrolled by the Border Security Force (BSF) and the personnel of the Assam Police. Previously, only the BSF used to patrol this border. The Home Ministry has also acceded to our demand for a second line of defence in the Indo-Bangladesh border. The Assam Government has been given a deadline of December 31 to complete personnel recruitment for the Prevention of Infiltration Force (PIF). Two additional battalions of the Indian Reserve Battalion will further strengthen the PIF, while some 1,400 fresh personnel will be recruited

A proposal of fencing the Indo-Bangladesh border has also been taken up by the Home Ministry. A deadline for the initiation of work in this regard has been set to December 31 this year. Before that a joint team led by the Director General of BSF, Ram Mohan, and comprising of  Assam government officials and the AASU would visit the border areas on November 14 and 15 to asses the situation. The Union Home Joint Secretary G K Pillai would later visit the border districts of Karimganj and Dhubri in January. It has also been decided in the meeting that a meeting would be held between the AASU and the state government every month to review the implementation of the Assam Accord.

Was there any decision taken on the issue of determination and deportation of illegal migrants from Assam? Was the Illegal Migrants Determination by Tribunal Act (IMDT) discussed in the talks?

Scrapping the IMDT Act will always be difficult.Everything depends on the whims and fancies of different political parties. The Congress has been opposing this for long time now. Since illegal Bangladeshi migrants in Assam form the biggest chunk of their votes in Assam, the Congress would never support such a move. However, the present BJP-led NDA (National Democratic Alliance) government seems to be seriously looking into the matter and some solution may evolve in future.

In the meeting, the Home Ministry has directed state government officials to preserve and update the National Register of Citizens of 1951, which is the only existing record of citizens of Assam.For this purpose the Centre has sanctioned a sum of Rs 10 lakh to the state government. However, our main priority will be the repealing of the IMDT Act.

How grave is the issue of illegal migrants in Assam?

If the present influx of foreign nationals into Assam continues at this rate, I can assure you that in a few years time we will have a Bangladeshi chief minister in Assam. Already the Assamese people in the state have become a minority. Soon they will become an endangered lot. All the 49 tribal belts and blocks in Assam have been occupied by illegal Bangladeshi migrants. Both the state and the Centre have failed to stop this immigration. We have been constantly demanding that the names of all illegal Bangladeshi immigrants after 1971 must be removed from the electoral roles, while all immigrants after 1986 must be immediately deported.

Although there has been regular patrolling by the BSF, why have they not been able to check illegal migrants crossing over into Assam?

The numbers of BSF personnel patrolling the border is not adequate. The Centre has assigned six BSF battalions to patrol the worst affected Dhubri and Karimganj districts while the BSF has managed to provide only five battalions. This is not enough to man the 262-km border. Further, This has left a number of gaps, through which illegal migration is continuing unabated.

Rape victims must not be named and shamed