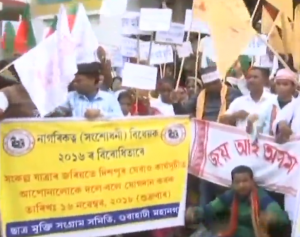 As many as 70 organisations led by the Krishak Mukti Sangram Samiti (KMSS) in Assam carried out a protest on Friday against Citizenship (Amendment) Bill, 2016.

A large section of people and organisations in the state have been opposing the bill.

According to KMSS leader Akhil Gogoi, if the proposed bill is passed, the Assamese people will become a minority in their own state.

“We are protesting against the bill and demand the government to scrap it,” Gogoi added.

The Citizenship (Amendment) Bill, 2016 was recently introduced in the Lok Sabha to amend the Citizenship Act, 1955 to grant Indian citizenship to Sikhs, Hindus, Buddhists, Jains, Christians and Parsis who fled religious persecution in Pakistan, Bangladesh and Afghanistan and entered India before December 31, 2014.