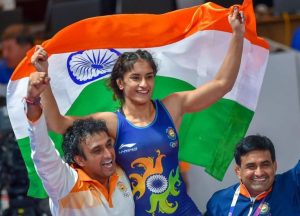 Vinesh Phogat on Monday won the gold medal in Wrestling at Asian games after she beat Japan’s Yuki Irie 6-2 in the 50-kilogram category.

“Another tournament, another medal! India rejoices in the victory of @ Phogat Vinesh. Congratulations to her on winning the Gold in the 50Kg wrestling event at the @asiangames2018. Vinesh’s repeated success will surely inspire upcoming athletes”, tweeted by Modi.

Many Bollywood celebrities congratulated Vinesh Phogat on her tremendous victory.