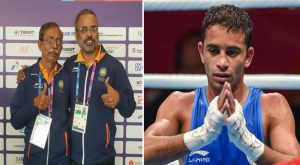 India added two more gold medals in its tally on the 14th Day of the Asian Games in Jakarta.

Pranab Bardhan and Shibhnath Sarkar earned the country another gold on Saturday, in the men’s bridge pair event, taking Indian gold medal tally to 15. India has 67 medals, including 15 golds, 23 silver and 29 bronze medals in Asian Games 2018. This is the country’s best-ever performance at the Asiad.

Earlier, India had won two bronze medals in the debut sport of bridge.

In the Men’s Boxing (49kg) event on Saturday, Amit Panghal became the eighth Indian boxer ever to claim a gold medal at the Asian Games with a stunning tactical win over reigning Olympic and Asian champion Hasanboy Dusmatov in the title clash.

Amit, the only Indian to make into the finals of Boxing in Asian games 2018, prevailed 3-2 against Dusmatov, who had beaten him in a split verdict in last year’s world championships.

Congratulating Amit for his victory, Rajyavardhan Singh Rathore tweeted, “GOLD NUMBER 14! BRILLIANT boxing by #TOPSAthlete Amit Panghal to secure a GOLD in Men’s 49 kg Boxing by defeating 2016 Olympic Gold medalist! What a proud, proud moment this is for us!”