Prime Minister Narendra Modi on Monday spoke to officials regarding the situation arising due to Cyclone Fani and asked them to take preventive measures.

“Spoke to officials regarding the situation arising due to Cyclone Fani. Asked them to take preventive measures and be prepared to provide all possible assistance. Also urged them to work closely with Governments of the affected states. Praying for everyone’s safety and wellbeing,” PM Modi tweeted.

The Cyclonic Storm ‘FANI’ over southeast Bay of Bengal and neighbourhood moved northwards with a speed of about 04 kmph in last six hours and lay centred at 0830 hrs IST of April 29 near latitude 8.7°N and longitude 86.9°E over southeast Bay of Bengal & neighbourhood, about 620 km east of Trincomalee (Sri Lanka), 870 km east-southeast of Chennai (Tamil Nadu) and 1040 km south-southeast of Machilipatnam (Andhra Pradesh). 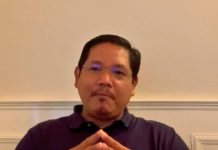