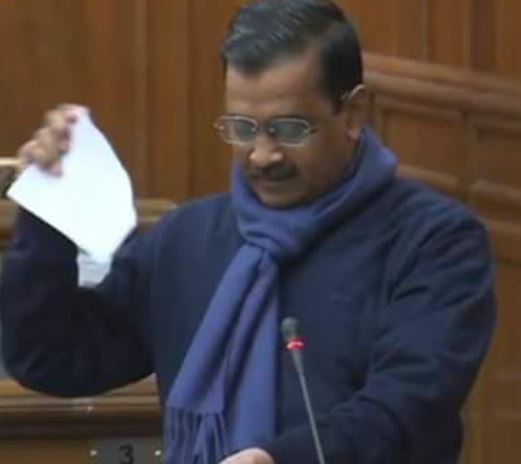 Delhi Chief Minister Arvind Kejriwal on Thursday tore copies of the Centre’s three new farm laws in the Delhi Legislative Assembly, saying that he could not betray the farmers protesting against three new laws.

“I am pained that I have to do this. I did not intend to, but I cannot betray the farmers of my country who have been sleeping on the streets in the cold when the temperature is just 2 degrees Celsius,” Kejriwal said.

Kejriwal further said more than 20 farmers have died during 20 days of protest and asked the Centre when it will wake up.

“What was the hurry to get the ordinance passed in Parliament during the COVID times ? It has happened for the first time that three bills were passed without voting in Rajya Sabha, even when several members were opposing the move,” said Kejriwal.

BJP’s Amit Malviya in a tweet lashed out at Delhi CM and said, “Last time Rahul Gandhi tore copy of a legislation passed by the Parliament and till date people of this country haven’t put a halt on Congress party’s electoral reverses. Now Kejriwal has joined the same league. This arrogance too will meet its fate.”

On December 7, Kejriwal visited Guru Teg Bahadur Memorial near Singhu border and inspected the arrangements made for the farmers.

Addressing the media at the memorial, Kejriwal reiterated his support to the farmers and said, “We support all demands of the farmers. My party & I have stood with them from the beginning of their protests. Our party, MLAs & leaders have been serving farmers as ‘sevadars’ ever since. I haven’t come here as CM but as a ‘sevadar’. Farmers are in trouble today, we should stand with them.”