Delhi chief minister Arvind Kejriwal on Tuesday slammed Congress for not joining hands with the AAP for the forthcoming elections. He alleged that the Congress was helping the BJP and that the two had a secret understanding because of which the Congress wanted to split anti-BJP votes in Delhi in the Lok Sabha polls

“At a time when the whole country wants to defeat Modi- Shah duo, Cong is helping BJP by splitting anti-BJP vote. Rumours r that Cong has some secret understanding wid BJP. Delhi is ready to fight against Cong-BJP alliance. People will defeat this unholy alliance,” Kejriwal tweeted.

Kejriwal’s comment came after Delhi’s Congress chief Sheila Dikshit announced that the party will not enter into an alliance with AAP in Delhi for the 2019 Lok Sabha elections.

She made the announcement after Congress president Rahul Gandhi called a meeting of all leaders of the Delhi unit to discuss the possibility of an alliance.

AAP, last week had announced candidates for six of Delhi’s seven Lok Sabha seats, giving up on the possibility of an alliance with the Congress. However, the party was open for negotiations and had several seat sharing formulas ready, sources said. 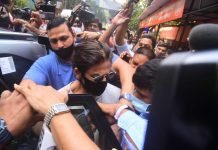