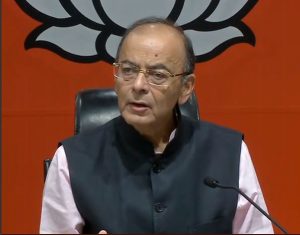 Senior BJP leader Arun Jaitley on Wednesday wrote to Prime Minister Narendra Modi asking him not to give him any responsibility in the new government due to health reasons.

“I am writing to you to formally request you that I should be allowed a reasonable time for myself, my treatment and my health and therefore, not be a part of any responsibility, for the present, in the new government,” Jaitley wrote.

The former finance minister said that during the last 18 months he had had serious health challenges.

He said after the campaign concluded, he had orally informed Modi that even though he was able to discharge the responsibilities assigned to him during the campaign, he would in future, for some time, like to keep away from any responsibility. This will enable him to concentrate on his treatment and health.

Jaitley further said that he would obviously have a lot of time to undertake any work “informally” to support the government or the party.