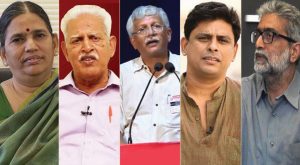 The arrest of five rights activists across the country in connection with the Bhima-Koregaon violence has stirred a hornet’s nest. The sudden and bizarre raids by the Pune police on August 28 at the homes of left-wing activists and the subsequent arrest of the activists has invited widespread criticism, with some labeling it as an ‘undeclared emergency.’

The arrested activists in question include a poet, a management professor, a business journalist and well known lawyers. The police had arrested Sudha Bharadwaj, Gautam Navlakha, Arun Ferreira, Vernon Gonsalves and P Varavara Rao, and it is on a look out for 10 more people.

The arrests have been made in relation to the Elgar Parishad, a public meeting held in Pune on December 31, 2017, a day before the violence at Koregaon Bhima. While the Supreme Court has given them relief by ordering only house arrests for them, the activists have been charged under different sections of the draconian Unlawful Activities (Prevention) Act (UAPA).

On January 1, 1818, the Mahar soldiers of the East Indian Company, led by the British, had defeated the massive Peshwa army in Koregaon. The Dalits regard the moment as a legendary stature in their history. This year, on 1st January, Dalits across the country had assembled in huge numbers in Koregaon to celebrate the 200th anniversary of a defining moment in their history. However, there were groups who were unhappy with this growing unity and celebration of Dalit stature. Consequently, they tried to stir and provoke the situation, which resulted in violence at the scene.

Prominent Dalit leader Prakash Ambedkar, the grandson of BR Ambedkar, had named Sambhaji Bhide and Milind Ekbote, the known promoters of Hindutva and popular leaders in Maharashtra. He blamed these two men for conspiring and orchestrating the violence at Koregaon on January 1 this year. There has hardly been any action on the firebrand Hindutva leaders from the government, the police instead arrested the human rights activists, accusing them of being part of the Elgar Parishad and conspiring to bring down the government.Sources say the arrests have also have been done regarding a letter that threatened of assassinating Narendra Modi, but the search warrants and witness documents suggested that the raids were in relation to Bhima-Koregaon violence.

In retaliation to the move, five eminent people recently moved the Supreme Court questioning the rationale of the arrests. The petitioners alleged the move was an attempt to silence dissent. The SC issued a notice to the Maharashtra government directing that the arrested activists be kept under house arrest till further hearing on September 6. The court said that “dissent is the safety valve of democracy” and that “if it is not allowed, the pressure cooker will burst.” The court gave relief to the activists, while questioning the motive of the simultaneous arrests.

The social media too was abuzz with citizens across the country expressing their outrage over the emerging anti-democratic atmosphere in the country. The arrested activists were attacked by trolls by using hashtags like “UrbanNaxals”, which were vehemently criticised by people from all walks of life. The rightwing trolls were responded with hashtags like #MeTooUrbanNaxal and netizens were open in expressing solidarity with the human rights activists. The hashtag #MeTooUrbanNaxal became number 1 trend on twitter, with the increasing number of people coming out in support of the arrested activists.

The Opposition parties, especially Congress, came out in the support of the arrested human rights activists, questioning the motive of the Maharashtra government in such actions. The Gandhi scion while on Kerala visit talked of ‘undemocratic’ ‘certain’ actions, apparently referring to the arbitrary arrests and raids across the country. Bollywood stars, activists, journalists and intelligentsia from across the spectrum have vehemently condemned the arrests as being an ‘attack’ on democratic values and an ‘undeclared Emergency’ of our times. Some referred to the arrests as being a ploy to divert attention from the demonetization failures.

The people have been expressing fears of a changing political environment which doesn’t go in sync with our cherished democratic values and puts a question mark on the intentions of the incumbent government.

The Case (That Wasn’t) Against Lalu Yadav