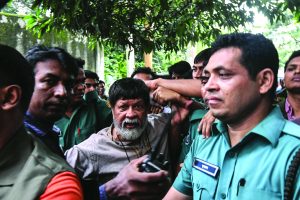 Bangladesh is in the international media, but once again for wrong reasons. Strong voices and pressures being mounted over the Bangla government in Dhaka from various parts of the world to release a well-known Bangladeshi photographer, social & human rights activist Dr Shahidul Alam, who was recently arrested from his residence. Alam made critical comments against the government and the authority termed it as against the nation. He was subsequently picked up by a group of over 25 plain clothed police officers from his Dhanmondi residence on the night of August 5. Prior to that, Alam participated in a talk show of Al Jazeera, where he made serious complain against the government.

He openly said that the AL leader (Hasina) continued clinging to power by brutal forces and she had already lost the moral ground to continue as the premier of Bangladesh. The sixty-plus activist ended up asserting the Hasina regime in Dhaka as authoritarian and it would definitely lose a free & fair election in the country.

The incident that pained Alam took place on July 29, when a speeding privately operated bus ran over two teenagers killing them and injuring few others in the Bangla capital city. A number of students initially assembled there as a protest to the killings and they demanded a road safety guidelines for the country. But soon the protest transformed into an anti-government actions.

Dhaka witnessed widespread demonstrations by thousands of students against the government. Finally the Hasina regime started taking strong actions against the demonstrators. In a similar protest program on 5 August, the police forces along with few masked youths (attached to the AL) harassed the agitating individuals using batons, tear gas, rubber bullets etc.

The masked youths with sticks in hands also targeted the scribes. Over twenty reporters and photo journalists sustained injuries in a single day. Alam was also on the spot and he was also targeted by the goons. Later in the evening Alam joined in a television talk show and criticized the authority for mismanaging the situation.

For two days, Alam’s anthropologist wife Rahnuma Ahmed and other well-wishers found it difficult to get his access. Later the high court ordered the authority to check Alam’s health in the government medical college and finally after due processes he was sent to the jail. On his appearance to court, Alam claimed that he was mentally and physically abused by the police.

As Alam, who leads Drik gallery, an acclaimed photo agency, and Pathshala South Asian Media Institute, a school of photography and multimedia journalism, was a familiar face for the Dhaka based media outlets, his arrest was covered by all national and international media persons. So sympathy waves in favour of the internationally commended photographer emerged very fast.

Four internationally accepted intellectuals namely Noam Chomsky, Naomi Klein, Arundhati Roy and Vijay Prashad also raised voices for Alam’s immediate release. Pointing out over tortures on Alam in prison, they asserted that it was dismay for the intellectual world. The government, which handed over prestigious award Shilpakala Padak to Alam, should respect his dignity and release Alam after dropping all charges framed against him.

A group of over 100 petitioners urged the government to investigate allegations of unlawful arrest and torture on Alam. They also demanded that the government should stop repression of students, academics, journalists and human rights activists.

Internationally acclaimed Indian photo journalist Raghu Rai, while sending a letter to PM Hasina, argued that Bangladesh is a country of poets, writers, artists, musicians etc, and honouring the spirit of democracy, the government should release Alam unconditionally and in a dignified manner.

The Bangla media fraternity under the banner of various journalist unions recently staged a protest demonstration in front of the national press club in Dhaka demanding stringent punishments against the  goons (read pro-AL activists) who attacked the scribes
during duty hours in the student’s protest demonstration.

The agitating journalists also declared that they would increase the intensity of protests in due course of time.

It may be noted that  Bangladesh in 2017 witnessed over 30 cases of assaults on journalists, where one murder (of Abdul Hakim Shimul from Dainik Samakal) was reported. The opposition BNP claimed that the AL leaders had filed over 75,000 bogus cases involving lakhs of political leaders and social activists.

Facing the heat, Prime Minister Hasina commented in the media space that the political opponents were using the turmoil to stir up anti-government sentiment as the nation was approaching for next parliamentary polls. She however assured that harsh punishments (read death penalty) would be pronounced against the callous drivers causing human losses.

Sajeeb Wazed Joy, Hasina’s son also stepped into the social media questioning Alam’s intention to allege that he was tortured by the police.

Joy went on speaking that the attending doctors in the medical college found no injuries on Alam’s body and the international media directly talked to the hospital authority to get it confirmed. But Alam during his court appearance alleged in front of news cameras that he was hurt and so  found difficulties in walking.

Though  emerged as a secular republic in 1971, Bangladesh soon lost its charismatic leader Sheikh Mujibur Rahman to assailants. Slowly the country went to dictator’s hand and it continued till 1990. The country regained democracy next year with the win of AL under the leadership of Hasina.

The last general elections in 2014 merged with violence allegedly propagated by the ruling party. The BNP boycotted the polls and many opposition candidates withdrew their candidature because of AL leader’s threats. The run up to the next parliamentary elections by the end of 2018 thus  promises disturbance and violence once again. 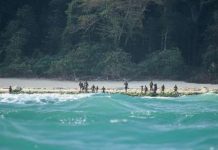