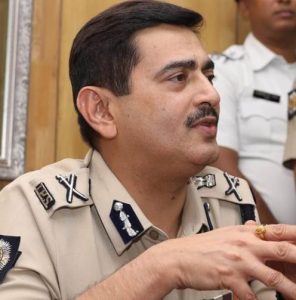 Additional Director General of West Bengal Police (law and order) Anuj Sharma was on Tuesday appointed as new Commissioner of Kolkata Police after his predecessor Rajeev Kumar was posted as ADG and IGP of the Criminal Investigation Department (CID), West Bengal.

Sharma who was earlier the Additional Director-General of West Bengal Police (law and order) is a 1991 batch IPS officer.

This came after Kumar was accused by the CBI of tampering with the evidence in the Saradha and Rose Valley chit fund scams.

A team of CBI officers on February 3 had arrived at Kumar’s residence in Kolkata for questioning him in connection with chit fund scam. However, the CBI team was not allowed to question and were instead detained by the Kolkata police. Following which a war broke out between the Centre and the Mamata Banerjee government with the Mamata sitting on a protest against the BJP-led Centre over alleged misuse of CBI.

The matter then reached the Supreme Court which directed Kumar to appear before the agency and cooperate in the investigation of cases arising out of the chit fund scandal.

The court chose Shillong as the neutral meeting place “to avoid all unnecessary controversy” and made it clear that no coercive action including arrest would be taken against Kumar.