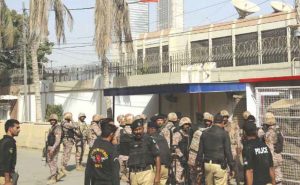 The foiled attack on the Chinese consulate in Karachi on November 23 cannot be dismissed as another incident of terrorist violence. It is a symptom of an underlying malaise that has led to a strong anti-Chinese sentiment in Pakistan. Though Pakistan has been getting massive Chinese investments for a long time as they are considered “allweather” allies, it appears that almos every activity involving China is being seen with suspicion there. The consulate was targeted in 2012 also when a motorcycle-bomb exploded near the Chinese diplomatic facility, though the Pakistan government said it could be aimed at the Rangers, its own paramilitary force.

Numerous instances of Chinese nationals being attacked in different Pakistani cities have been reported off and on. In February this year, two executives of a Chinese transportation company were shot by gunmen in Karachi, with one of them losing his life. In October last year, 26 Chinese nationals were wounded when a dormitory for workers at Gwadar port was attacked with grenades. Recently, the Chinese Embassy in Islamabad was forced to issue a travel warning to its nationals when it came to know of a terrorist plan to assassinate the Chinese Ambassador.

The anti-Chinese sentiment in Pakistan is not new. Perhaps, the most serious such case was the kidnapping of seven Chinese massage parlour workers (six women and one man) near Islamabad’s Lal Masjid in June 2007 by students of the two Islamic seminaries attached to the mosque. The Chinese, kept in the mosque-madarsa complex for a few days, were freed but after a high drama. The Pakistan army had to launch an operation to clear up the complex, leading to the death of one of the two clerics managing the madarsas attached to the mosque.

Pakistan Prime Minister Imran Khan’s comment on the November 23 Karachi incident appears to have grains of truth. He observed, “The failed attack against the Chinese consulate was intended to scare away Chinese investors and undermine the China- Pakistan Economic Corridor (CPEC).” A large section of Pakistan’s population suspects the Chinese intentions behind the CPEC plan. There is a strong feeling that the large-scale Chinese investments through various projects, including the CPEC, running from Kashgar near China’s Xinjiang province to Gwadar port in Balochistan, cannot be without a major, though clandestine, objective of converting Pakistan into their colony. They regard the Chinese as the British East India Company, which began its activities as a trading organisation during Mughal rule but facilitated the capture of the entire country by the British colonialists.

The basic undeclared idea behind the Chinese One Belt One Road (the new name for the old Silk Route) scheme is to increase the area of Chinese influence by using its economic muscle power. This fear behind the Chinese massive investments in the Maldives caused country-wide resentment against the previous pro-China Abdulla Yameen regime, which got replaced by the Ibrahim Mohamed Solih government after the September 23 Presidential election there. The long-term Chinese plan in the guise of the CPEC programme has been spelt out in a document which was carried in Pakistan’s Dawn newspaper some time ago.

The schemes as contained in the document , according to Dawn, have it that “thousands of acres of agricultural land will be leased out to Chinese enterprises to set up ‘demonstration projects’ in areas ranging from seed varieties to irrigation technology. A full system of monitoring and surveillance will be built in cities from Peshawar to Karachi, with 24-hour video recordings on roads and busy marketplaces for law and order. A national fibreoptic backbone will be built for the country not only for internet traffic, but also terrestrial distribution of broadcast TV, which will cooperate with Chinese media in the ‘dissemination of Chinese culture’.”

The plan further envisages “a deep and broad-based penetration of most sectors of Pakistan’s economy as well as its society by Chinese enterprises and culture. Its scope has no precedent in Pakistan’s history in terms of how far it opens up the domestic economy to participation by foreign enterprises. In some areas the plan seeks to build on a market presence already established by Chinese enterprises eg Haier in household appliances, ChinaMobile and Huawei in telecommunications and China Metallurgical Group Corporation (MCC) in mining and minerals.”

The implied threat to national security and the mention of the “dissemination of Chinese culture” are among the factors causing worries in sections of Pakistanis. The opponents of massive Chinese investments have been cautioning the government to go slow on the CPEC plan. But the successive governments have been ignoring these voices as they could not afford to take any measure that could hit Pakistan’s economic growth. The December 2015 CPEC document, titled “Long-Term Plan On China-Pakistan Economic Corridor”, has 231 pages. An abridged version of the document having 30 pages was provided to the Punjab government, but not to other provincial governments as they are apparently not considered significant in the CPEC scheme.

The Chinese official explanation for its citizens in Pakistan being increasingly targeted has been that the reported attacks were planned and executed by Islamic fundamentalist groups such as the East Turkestan Independence Movement, the Al-Qaeda and the Islamic State, but it has not denied what has been carried in the Western media in this regard. According to American and European media reports, the Pakistanis in general believe that China is imposing “unequal treaties” on their government for huge economic profits. One of such stories in circulation is that under the 40-year lease given to China for running Gwadar port, the Pakistan government will get only 10 per cent of the profits accrued from its operations. This might be among the reasons why the Pakistani media reported some time ago that the Imran Khan government might adopt a go slow policy on the CPEC programme. This is quite likely as among the parties supporting the new government in Islamabad are those which have been opposed to allowing Chinese investments on a huge scale.

These parties have been voicing their concern over China getting increasingly involved in Pakistan’s domestic affairs. One example that has been mentioned is that Beijing has bypassed Islamabad and directly approached Balochistan’s separatist elements to ensure safety of its investments. One should not be surprised if attacks on Chinese nationals and projects in Pakistan get intensified in the days to come.