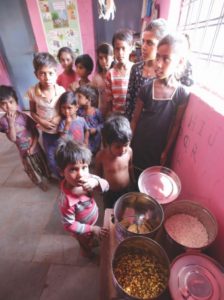 Amidst the raging debate over inclusion of eggs in anganwadi meals to prevent child malnutrition, a novel concept started in seven anganwadis in Pohari block of Madhya Pradesh’s Shivpuri district attempts to provide healthy snacks to children apart from daily meals twice a day. The initiative, part of the community-based management of malnutrition started by non-profit Vikas Samvad Samiti (VSS) in 2017, was launched keeping in mind health and nutrition issues among Sahariya tribal children.

Primitive way of living, social seclusion and the loss of traditional livelihood opportunities have made the Sahariyas one of the most vulnerable tribal communities in India. As they live in acute poverty and relative isolation, the children face pangs of hunger and food insecurity.

With a view to prevent children from falling into moderate acute malnutrition and severe acute malnutrition categories, the concept of nutri corners has been launched in anganwadi kendras by VSS in five villages of Pohari block. These are Sonipura, Jakhnoud, Macha Khurd, Gwalipura and Madhopora. This serves twin purposes: children stay full hours every day and have access to nutritious food as well.

Healthy snacks such as gram, puffed rice, jaggery, peanuts and laddoos made of sesame seeds are kept in steel containers in these anganwadis. The air-tight steel containers are kept in a certain corner in each anganwadi so that children can eat whenever they feel hungry. For easy identification, the words “nutrition corner” has been written on walls. Steel containers have been chosen in a bid to discontinue plastic use.

Community support is being taken to run the initiative. Under this programme supported by CRY, preparations are on to open more such corners in other anganwadis. Apart from access to nutritious food, clean practices like hand washing before eating is also taught to children. This ensures the concept of cleanliness among them. The practice of taking food from containers is also leading to social development in children, as they learn the joy of sharing food with others.

In Macha Khurd village, anganwadi sahaika Rani Parihar said, “We go to villages and collect dry food items like puffed rice, gram, bajra, peanuts and jaggery. There is a dedicated core committee in every village to ensure food supply to nutri corners.”

According to VSS worker Arti Parashar, there is high food insecurity among the Sahariyas. “The Sahariya homes are almost bare. They mostly have dry rotis for food. The families don’t have utensils and most children eat with their hands or keep food on the ground. The nutri corner initiative has been over a year now.” Parashar is project coordinator, community based management and malnutrition for VSS.

The concept has also helped to lure children to day-care centres as many Sahariya children skip anganwadis and accompany their mothers to fields. Parashar added that the initiative ensures access to both food security as well as nutrition among poor children. As they share food, their social bonding too deepens.

VSS coordinator Ajay Singh Yadav said the concept started as we made real efforts to feed children and make them stay at anganwadis. “As their nutrition intake was at stake, we ensured that they remained happy in these care centres and also got adequate food if they felt hungry between meals. We discussed with villagers and they agreed to help us. Whatever they have in their houses, they supply to us on a monthly basis for running these nutri corners.”

Sonipura anganwadi sevika Gayatri Sen said children come by 9am and stay back till 1pm. In the meantime, even if they get breakfast and lunch, they sometimes feel hungry. So, they mostly like eating jaggery, gram and puffed rice and take out these foods by themselves. They get breakfast at 10am and lunch between 12 and 12.30pm. For breakfast, khichdi and dalia are served mostly. Dal, rotis and rice are served for lunch. Sonipura sahaika Parvati Adivasi said children come every day after nutri corners started and attendance has gone up.

“In anganwadi centres, children mostly used to run away earlier. Then core groups consisting of eight members were formed and they started collecting dry foods from the villages. Now, the attendance is good,” Adivasi added.

Egg of the matter

According to Dipa Sinha, assistant professor (economics) School of Liberal Studies, Ambedkar University, Delhi, the initiative will encourage children to snack on healthy alternatives rather than ultra-processed packaged stuff. “It can also have a demonstration effect. Moreover, these children get very little diversity in their diets at home, so this is a good way to ensure that.”

However, she doubts whether these types of foods can be a replacement for eggs. “Eggs are more wholesome nutritionally. Beyond that the exact nutritional content of these foods will have to be looked into. But generally to meet the same nutrition density of an egg at the same cost is not possible,” she added. In June 2019, Sinha had written an article in Down To Earth advocating eggs, onions and garlic in midday meals.

Eggs are still not served in Madhya Pradesh because of political considerations and there is a reluctance to spend more on children, she pointed out. The other animal-based protein is milk, but that is logistically difficult to serve. Also, in many tribal cultures across our country, there is no practice of drinking milk, Sinha explained.

Yadav also rued that eggs are still not given in the state even though there has been a lot of advocacy on the issue favouring its inclusion.

One of the 17 Sustainable Development Goals is to end hunger and achieve food security by 2030. As India battles with stunting, wasting and underweight among growing children, such a step may bring about a positive change. The Comprehensive National Nutrition Survey: 2016-18 points out that 33 per cent of Indian children aged 0-4 years are underweight. Madhya Pradesh has been identified as one of the states with the highest prevalence of underweight children, besides Bihar, Jharkhand and Chhattisgarh, the report says. The National Family Health Survey-4 report says that children under five years, who are underweight, stands at 49.8 percent in the rural areas of Shivpuri.

Talking about the initiative, Soha Moitra, regional director, CRY (North) said community-based interventions like this are actually giving good results and the organisation is constantly pushing for such efforts among the Sahariyas. 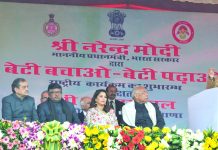