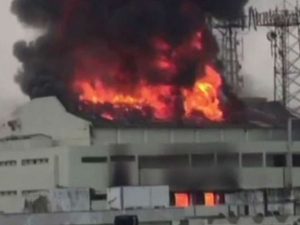 A fire broke out on Monday morning at Sri Kanya Cinema Hall located in Gajuwaka in Andhra Pradesh’s Visakhapatnam district.

As many as five fire tenders were rushed to the spot to douse the raging fire at Sri Kanya Cinema Hall.

No immediate reports of injuries or causalities in the fire incident have been reported.

This fire incident has come a day after a massive blaze broke out in Kolkata’s congested Bagree Market on Sunday.

At least 30 fire tenders tried to contain it from spreading for over 20 hours. The fire reportedly broke out at 2:45 AM.

One Flew Over The Cuckoo’s Nest