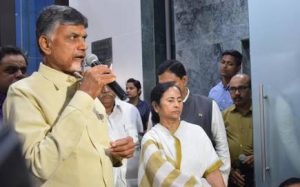 Andhra Pradesh Chief Minister and TDP president N Chandrababu Naidu on Monday met with his West Bengal counterpart Mamata Banerjee and reiterated the need for a Mahgathbandhan ‘to save the nation and democracy’.

After meeting Mamata Banerjee, Naidu said that all the parties that oppose the Bharatiya Janata Party (BJP) will have to stand together to “protect the nation” as “democracy is in danger”.

At the joint press conference held in the evening, Banerjee said, “We are all faces of the Mahagathbandhan. Most of us are even senior than Modi.”

Flanked by Mamata Banerjee, Naidu said that all the institutions are under threat. Institutions like CBI, ED, Income Tax department, RBI and CAG are under severe pressure.

Chandrababu Naidu announced the deferment of the November 22 Opposition conclave in Delhi to be held for chalking out details of the proposed anti-BJP front.

Emerging from an hour-long meeting with his West Bengal counterpart Mamata Banerjee, Naidu said that the fresh date for the meeting of non-BJP parties will be announced very soon.