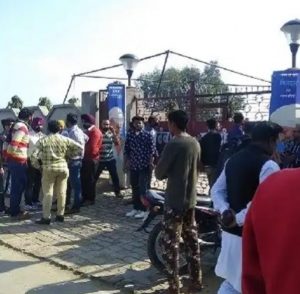 At least three people have been killed and 10 others injured on Sunday in a grenade attack at Nirankari Bhawan in Amritsar’s Rajasansi village.

The incident occurred in afternoon when hundreds of people had gathered to participate in an event.

According to reports, unidentified bikers hurled explosives in the premises and managed to escape from the site.

The injured were immediately rushed to nearby hospital.

Meanwhile, police said that high alert has been declared in Punjab and search operations are underway to identify the culprits.

Punjab was on alert following an input claiming that a group of six to seven JeM terrorists were reportedly in the state.

Punjab Chief Minister Capt. Amarinder Singh strongly condemned the blast and announced compensation of Rs 5 lakh to the kin of dead and the free treatment for the injured.

“Strongly condemn the bomb blast at Nirankari Bhawan in Amritsar. Have asked Home Secy and @PunjabPoliceInd DGP, DGP Intelligence and DGP Law & Order to rush to the spot to investigate,” Singh tweeted.

“My heart goes out to victims of the Amritsar bomb blast & their families. My govt will give Rs 5 lakh to kin of each of the dead and free treatment to injured. Have asked district administration to extend all help,” Singh added.