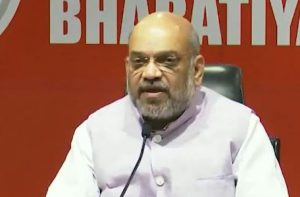 BJP chief Amit Shah on Wednesday accused the Trinamool Congress for the violence during his roadshow in Kolkata. He alleged that TMC party workers were part of a conspiracy to vandalise the statue of Ishwar Chandra Vidyasagar.

Amit Shah told reporters in Delhi that he would not have escaped unhurt without CRPF protection when his convoy was allegedly attacked in Kolkata on Tuesday.

He showed photographs of the said clash in his rally, pointing to the fact that the gates of the Vidyasagar college were closed.

“If the gates were closed, how can anybody enter the college. Only TMC. They must have only vandalised the bust,” he added.

Shah alleged that the Election Commission (EC) had been a mute spectator in West Bengal.

Shah said the party’s campaigners, including Uttar Pradesh Chief Minister Yogi Adityanath, had been restrained from campaigning in West Bengal.

The BJP president said the TMC is contesting elections on 42 Lok Sabha seats in West Bengal, while the BJP is fighting in every state. If only Bengal is facing violence, then it is because of the Trinamool.

On Tuesday, clashes broke out between BJP supporters and student activists as Amit Shah took out his roadshow through Kolkata’s College Street.

‘RSS members are present even in the congress party’