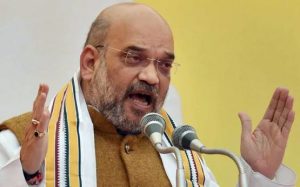 The Bharatiya Janata Party (BJP) came out strongly against the controversial statements of its three-party leaders Pragya Singh Thakur, Union Minister Anant Kumar Hegde and Nalin Kumar Kateel on Mahatma Gandhi’s assassin Nathuram Godse and have been asked for an explanation within 10 days, BJP president Amit Shah said in a series of tweets.

“All three have withdrawn their statements and have also apologized, but these comments are against the decorum of public life and BJP ideology, the party has taken a serious note of their statements and are being referred to the disciplinary committee,” Amit Shah tweeted.

Amit Shah has asked the party’s disciplinary committee to submit a report on the issue in 10 days.

Shah further said the remarks made by Pragya Thakur, Anant kumar Hegde and Nalin Kateel were their personal statements and had no link with the party.

Pragya Thakur had on Thursday said Godse was a “patriot”, while, Anant Kumar Hegde tweeted that he was “glad” over the debate on Godse.

“Am glad that 7 decades later today’s generation debates in a changed perceptional environment and gives good scope for the condemned to be heard upon. #NathuramGodse would have finally felt happy with this debate!” Hegde said in a tweet.

“Godse killed one, Kasab killed 72, Rajiv Gandhi killed 17,000. You judge who is more cruel in this??” – Nalin Kateel tweeted on Thursday.

The tweets have vanished from their Twitter timelines. Anant Kumar Hegde claimed that his account had been hacked.

“My Twitter account has been breached twice in the past one week and certain tweets have been posted on my timeline which has been discarded and deleted. Regret the posts attributed to me,” Hegde tweeted.