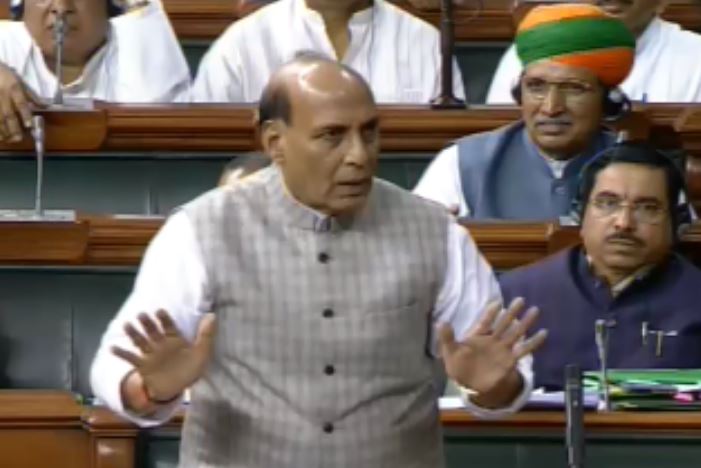 There was no question of accepting any third-party mediation on Kashmir, Defence Minister Rajnath Singh said in Parliament on Wednesday.

As the opposition demanded Prime Minister Narendra Modi’s clarification on a US President Donald Trump claim that he had been asked to mediate between India and Pakistan on the Kashmir issue, Singh said there was no discussion on Kashmir in the meeting between US President Trump and PM Modi in June and there was no question of any mediation on the issue.

On Tuesday, External Affairs Minister S Jaishankar said that PM Modi had made no request to President Trump to mediate on the Kashmir issue with Pakistan.

“I would like to categorically assure the House that no such request has been made by Prime Minister Modi,” Jaishankar said.

He further said it had been the consistent position of India that all outstanding issues with Pakistan could be discussed only bilaterally.

Rajanth said, Jaishankar had already clarified that there was no talk on Kashmir when Modi had met Trump at Osaka in June.

“The statement of Jaishankar is authentic because he was present at the meeting,” the Defence Minister said, adding that, “It is a matter of national pride for us and we can never compromise on that. When we talk to Pakistan it will not just be on Kashmir, it will also include Pakistan-occupied Kashmir,” he said.

The Opposition today walked out in protest saying that PM Modi should clarify on a stunning claim by President Trump.

On Monday, President Donald Trump had claimed that PM Modi had asked him to play the role of a mediator on Kashmir.

He said, he had received a request to do so from PM Modi during a recent meeting with him.

“If I can help, I would love to be a mediator. If I can do anything to help, let me know,” Trump said.