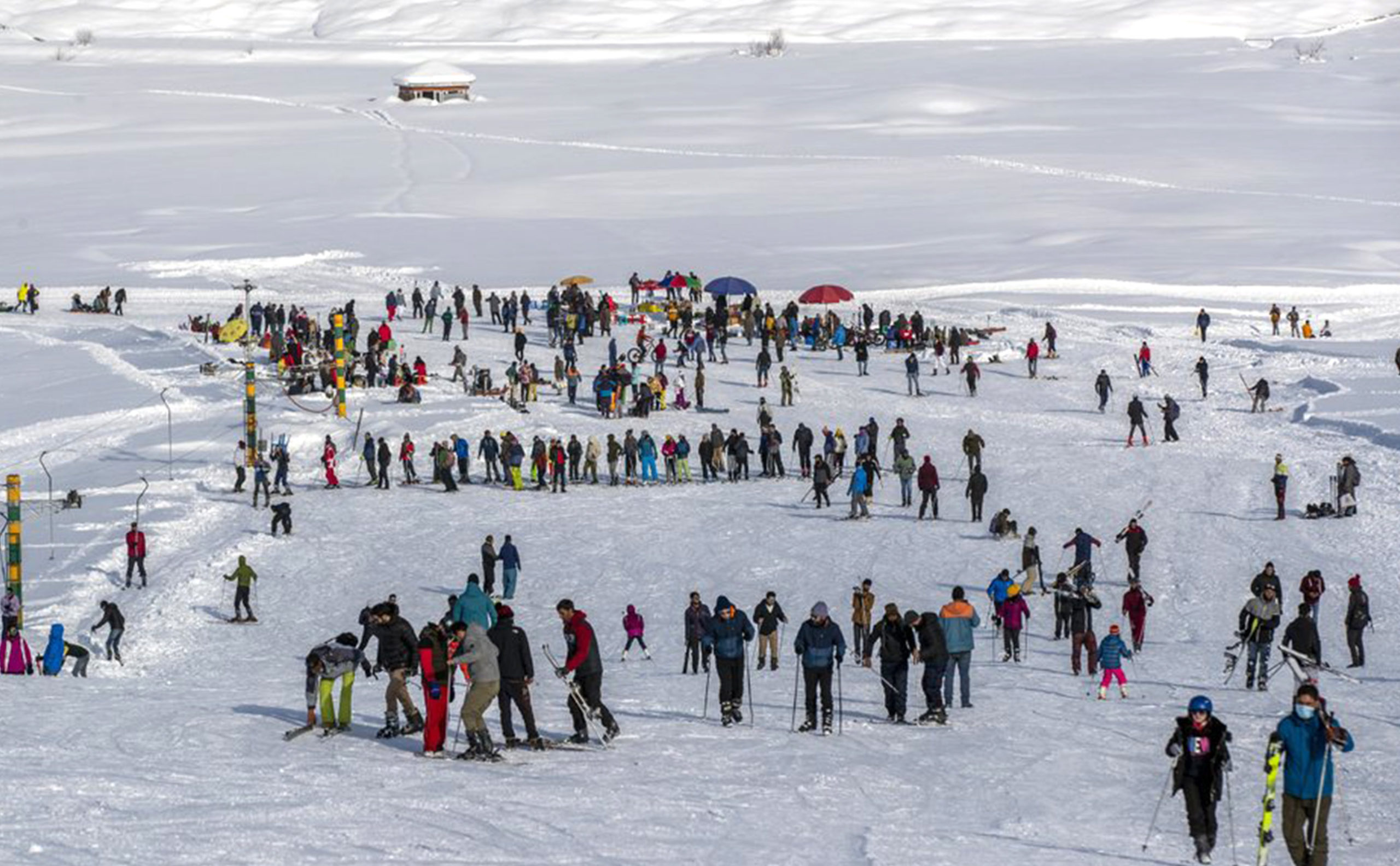 Kashmir witnessed a record inflow of 2.5 lakh tourists in November and December, igniting hopes of revival of tourism in valley. But the looming Omicron can put paid to hopes, reports Riyaz Wani

In what is billed as a record in the past seven years, Kashmir witnessed an inflow of 2.5 lakh tourists in November and December, most of them visiting Gulmarg, one of the Valley’s most famous hill resorts situated at an altitude of 8960 feet.

According to the tourism department, the occupancy of the hotels in the resort has gone up to nearly 100 percent, so has that of the hotels and houseboats in Srinagar and other places like Pahalgam. Snowfall in the Valley has been a big draw for the tourists which is a novelty for most people in mainland India.

Also, with international travel continuing to be barred if not banned, Kashmir has become the preferred destination for tourists in the country. More so, in the winter when unlike most parts of mainland India, it snows in Kashmir.

The current rush began in October itself when around 93,000 tourists visited the Valley. Over 6 lakh tourist footfalls have been recorded in Kashmir in 2021.  In 2020, 4.1 lakh tourists had visited Kashmir amid the then runaway pandemic.  These are glad tidings for the sector otherwise battered by the turmoil following the revocation of Article 370 in August 2019 and the subsequent Covid-19 pandemic.  In 2021, however, Kashmir’s economy was able to recover some of its losses.

Things are likely to look up further with India’s economy recovering fast from the ravages of the Covid-19 pandemic.  That is if the new virus mutant Omicron doesn’t usher in yet another nationwide wave which now looks likely considering the steep rise in the number of infections across the country.

Tourism is one of the mainstays of the Kashmir economy. And the return of tourists to the Valley in large numbers is a positive development.

“Tourist footfall has been between 4,000 and 5,500 per day in November and December,” said a tourism official. “And we expect it to pick up further if the third Covid wave doesn’t catch on.”

And to this end, the administration has already taken steps to protect the Valley as a safe destination. This has involved a two-pronged strategy: one, vaccination of the people associated with the tourism. Second, strict enforcement of the SOPs to ensure the safety of the tourists during their stay in the Valley. The administration has already carried out vaccination drives at tourist destinations.

But if the Omicron wave spreads as looks likely, it could put paid to the hopes of a revival in tourism. In fact, it already has. The number of tourists who visited the Valley in January has come down to 35000.  Also, there is some opposition in the Valley to the encouragement of the tourist arrivals in the midst of an Omicron wave.

“Thousands of tourists are a boon for our economy, but it could bring the third wave to our doorsteps,” said Rafiq Ahmad, a school teacher in Srinagar. “So, the government should take proactive steps to regulate tourism and ensure proper check-ups are done at the airport before tourists are let in.”

Meanwhile, together with the rest of the country, the Covid caseload in Kashmir has also shown a marked upward trend. But, for now, the people associated with the tourist sector are hoping that the third wave blows over soon, so that the tourists continue pouring into Kashmir.

“Tourism has the potential to shore up our beleaguered economy,” said Nasir Shah, a major travel and tourism operator. “Here’s hoping that things improve from hereon. Reigning in the pandemic would create conditions for the unhindered tourism in the Valley”.